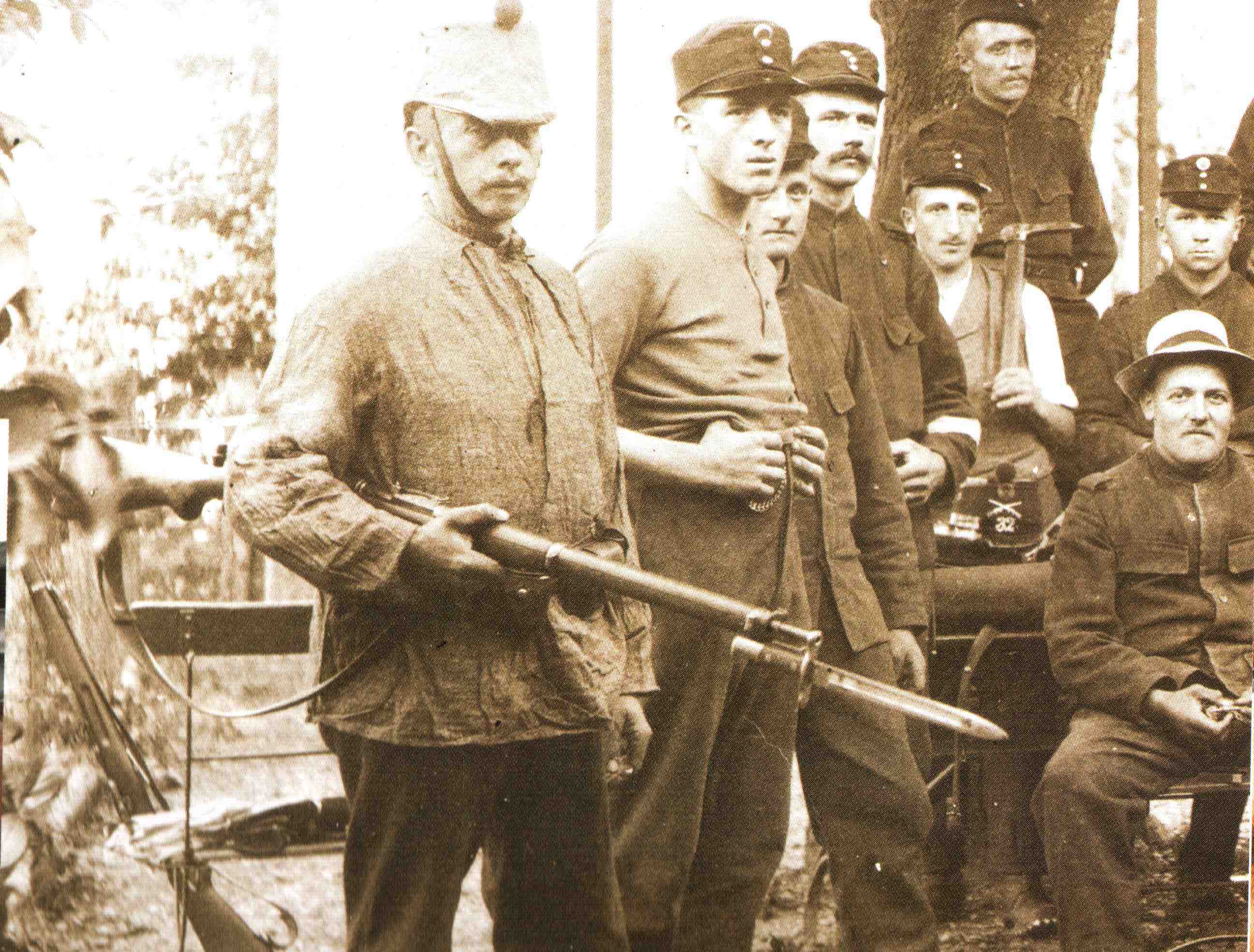 Together with the 1911 rifle, the 1896/11 was the standard issue rifle of the Swiss Army infantry soldiers since the beginning of the First World War. Following the trials of 1907 and 1908, in 1911 a new spitzer bullet was introduced, which replaced the older round nose GP(18)90.
The new cartridge offers a better performance, and the only type of bolts that can resist the pressure generated by GP11, are the 1896 bolts. Careful: do not shoot GP11 with 1889 and 1889/96 rifles; it is a danger to both shooter and rifle. 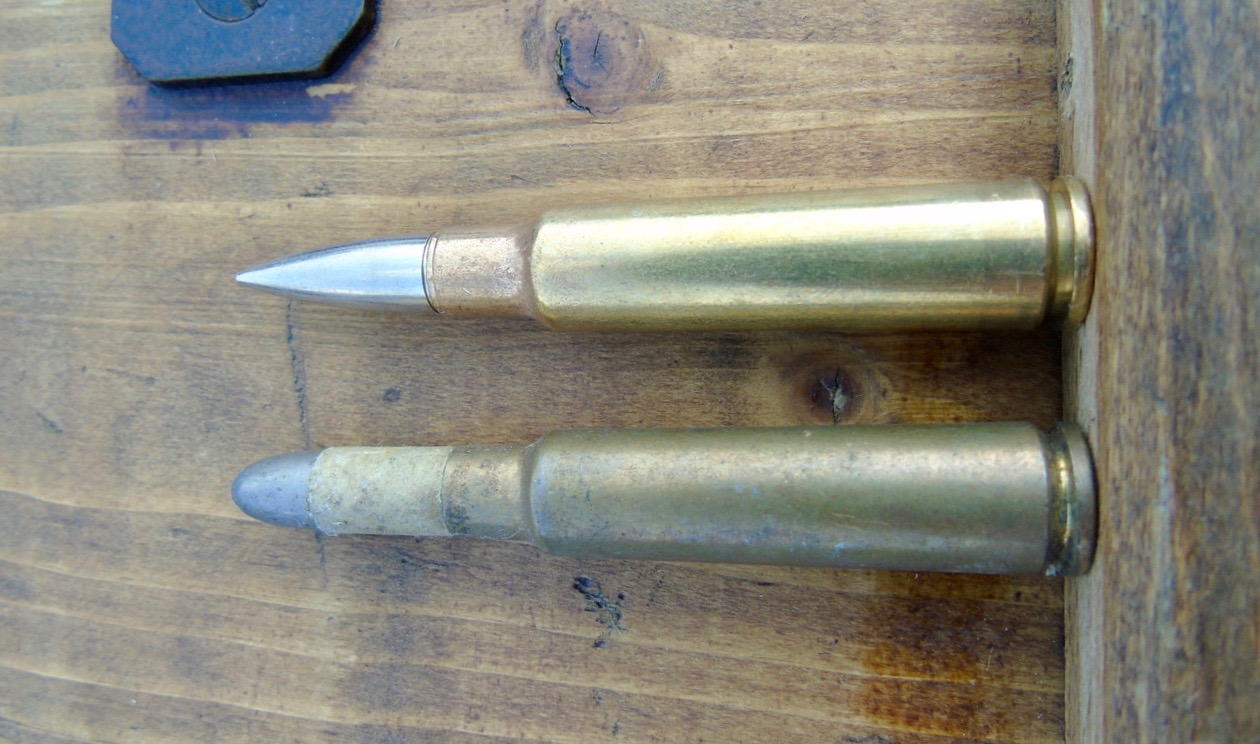 Differences between GP90 (under) and GP11 (over)

The 96/11 are conversions of the model 1889/96, which appeared rather identical to the standard 1889. Mod. 1896s in their original configuration are incredibly scarce today – even in Switzerland – as quite every rifle was converted to the 1911 pattern.
Conversion begun in 1912, proceeding during the Great War and ended in 1920, with a total of about 135-137.500 units, depending on the sources.

The conversion process consisted in the substitution of the barrel, which already carried improved sights. Original stocks were modified by adding a semi-pistol grip, and a new magazine housing plate was added to cover the empty space once occupied by the older plate. The new magazines hold now 6 cartridges instead of 12. 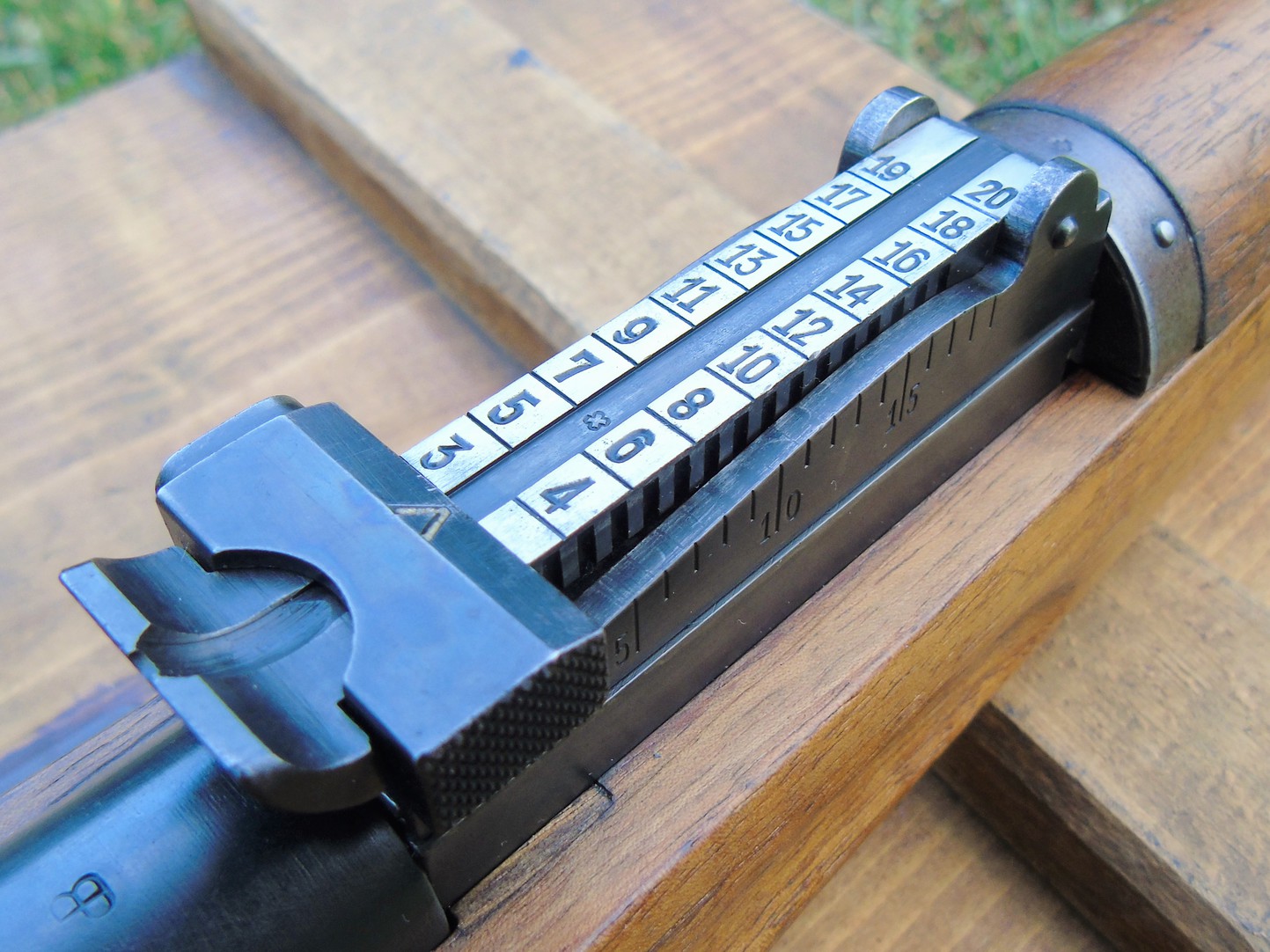 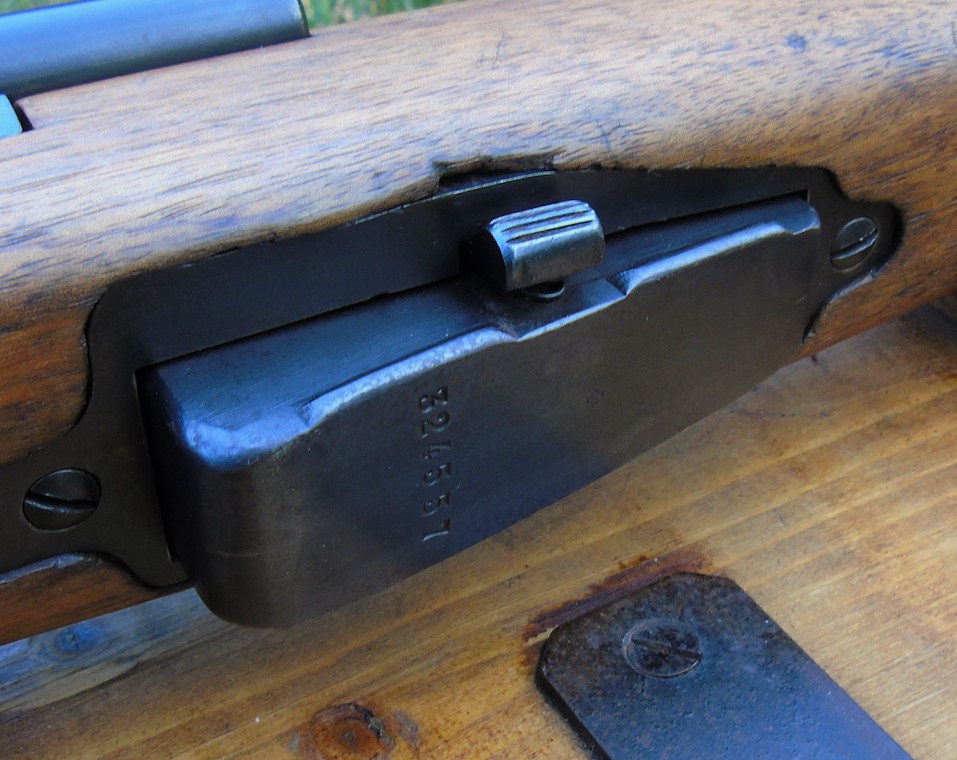 It is simple to distinguish the 96/11 from the long 1911: it is sufficient to look at the buttstock. In 96/11s the upper buttstock is flat (curved in the 1911s), and it is evident, that the semi-pistol grip is an added wood piece. 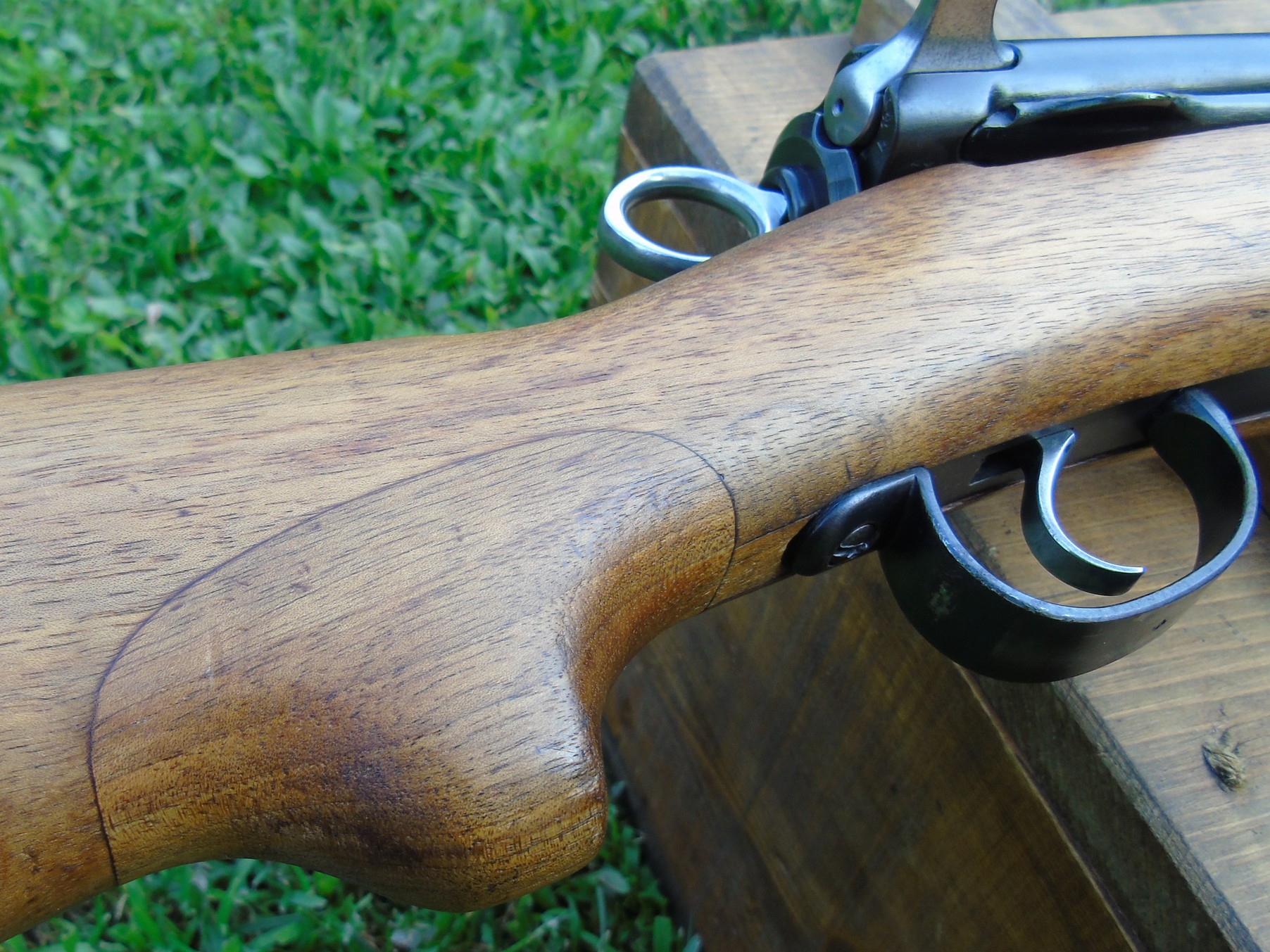 The rifle’s action is called the straight-pull, a name derived from the movement of the bolt: the shooter can operate the bolt without having to rotate the bolt to disengage the locking lugs. The cylinder that covers the bolt body rotates as the bolt handle is pulled; hence, the breech is unlocked. At first glance, as the bolt is set apart from the rifle, it seems like a massive syringe, partly because of the ring that operates the striker. It is an effective selector, because it engages the safety (horizontal position) and disengages it (vertical position). It is possible, by turning the striker “halfway”, between safe and fire positions, to disassembly the bolt: an incredibly easy operation, if compared to Steyr-Mannlichers, for instance. You will need no tools at all. It surely presents titanic dimensions if compared to other straight-pulls of that age, as the receiver shows, but by operating it the shooter will experience an extremely smooth action. It is indeed a cumbersome action, it displays an amazing steampunk style, but it represents the basics for the next Swiss “state-of-the- art” military-issued rifle: the K31. 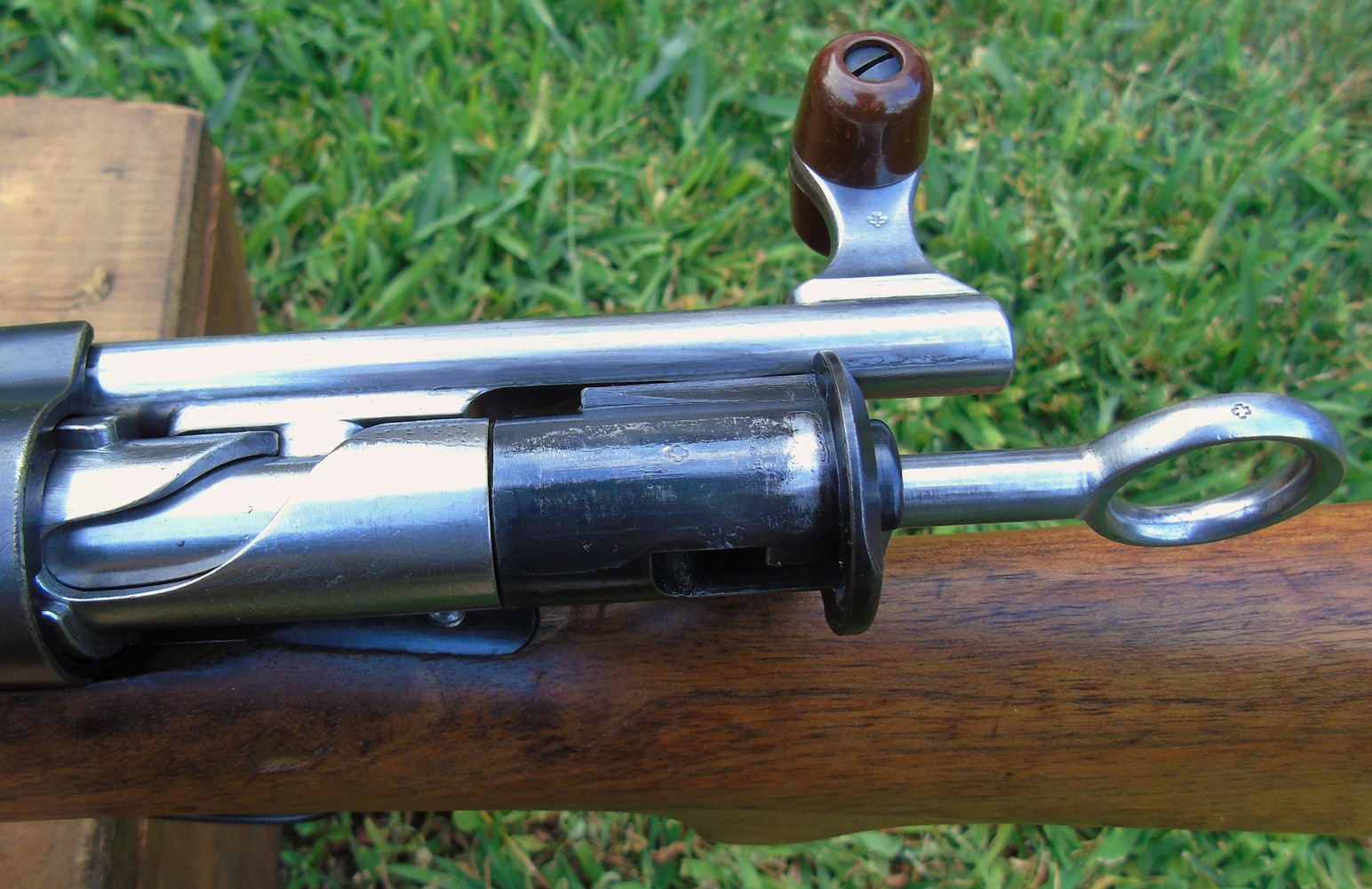 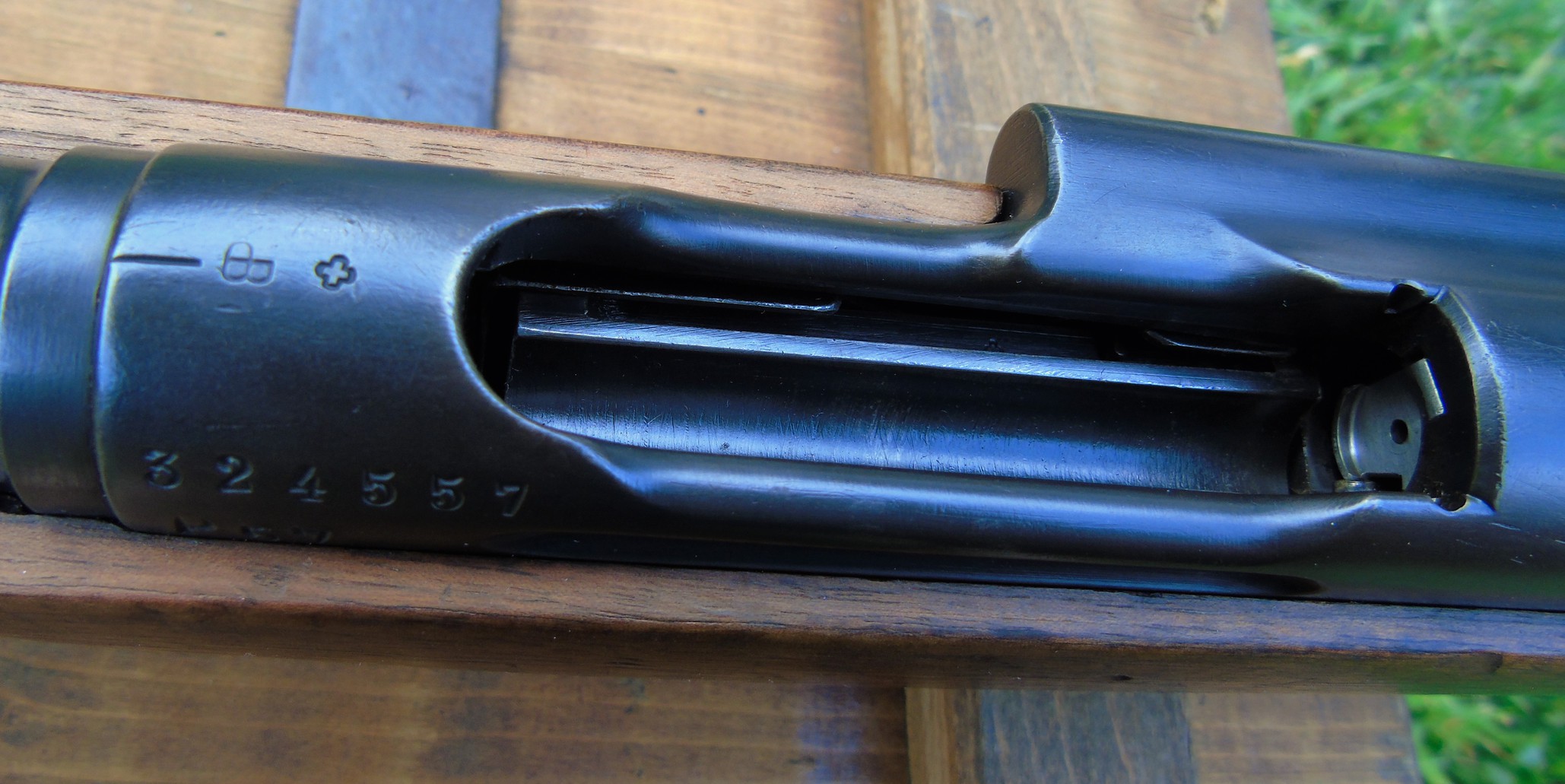 The markings appear mostly on the front part of the receiver and around the cartridge chamber, both noticeable and invisible, in contact with the stock. The most noteworthy it appears under the serial number, “P57”. This marking certifies the property transfer from the Army to the militiaman who was issued with this specific rifle. In the Swiss militia system, after the citizen ceases to be obliged to serve in the Army, he has the right to purchase his personal rifle and own it (the pistol in the officer’s case). This stamp literally means “privatised in 1957”, when the soldier was not obliged to serve in the Army anymore.

On the upper side of the chamber, from top to bottom:

ï‚·  “Heart”: believed to be a subcontractor stamp or a material proof marking.

attesting the year of the replacement.

Furthermore, many metal parts bear the “Swiss cross” stamp, being the acceptance marking for the single component (We are talking about the Swiss!).
It is common to find stamped on the right side of the buttstock the cartouche “cross-in-the-shield”, in a different shape from that of the K31’s crest. On the stock, under the barrel, we can find serial number, manufacturer’s cartouche and another Swiss crest, the same as the one on the buttstock. Interestingly, it may be possible to find the manufacturing date under the buttstock plate: Roman numbers indicate the month, while the Arabic the year. By the way, it does only specify the manufacturing date of the stock, as these were sent to the assembly factories and waiting to be matched to the action. It is in fact common to find a date that precedes the year of manufacture by circa one year.

Many thanks to Tom of www.swisswaffen.com for his assistance in explaining the markings! 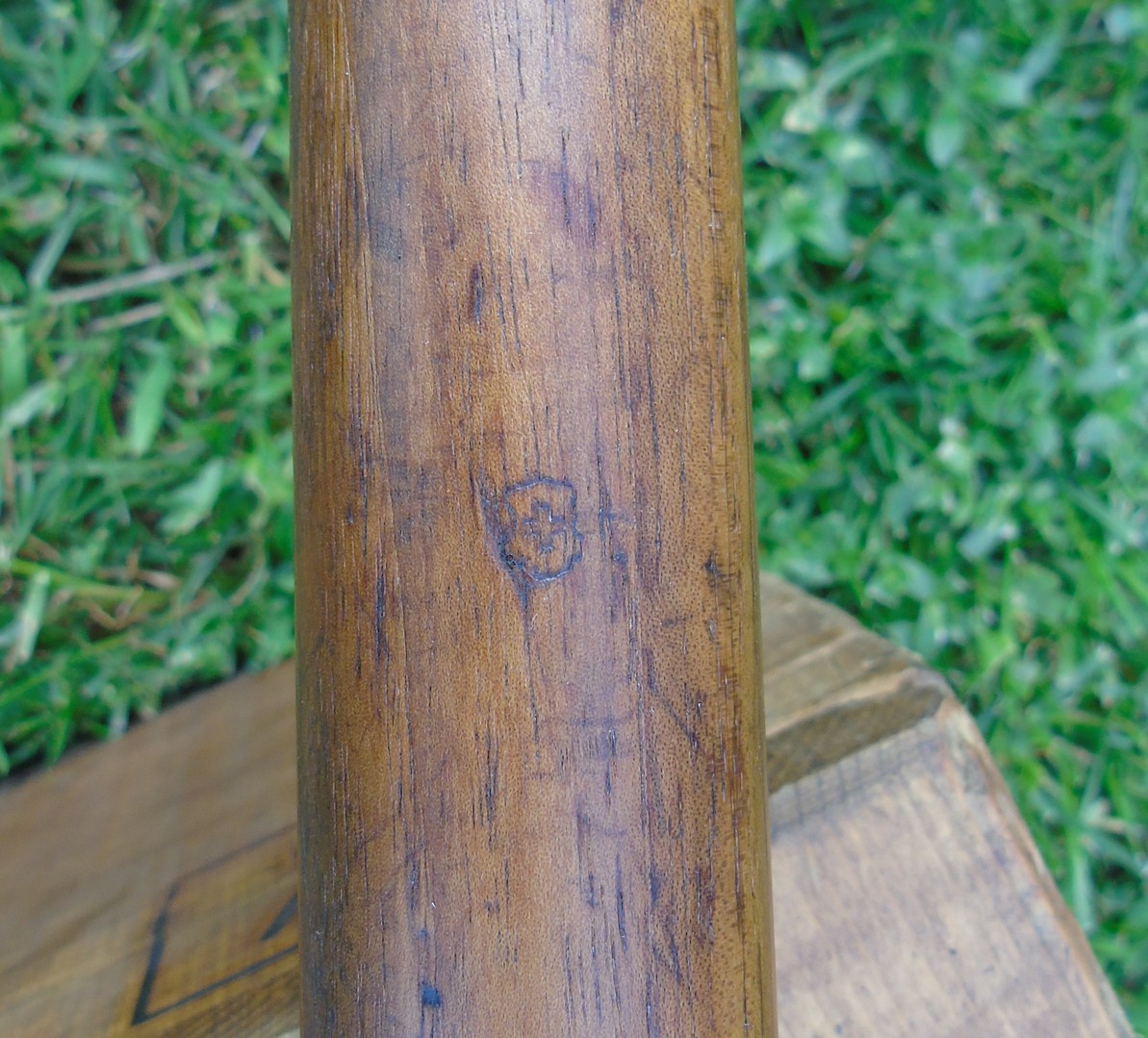 96/11’s serial numbers are stamped on many components, both metallic and wooden. For instance, it is marked the full number on the chamber, bolt and receiver, as well on the magazine and stock. Other smaller parts bear the last three digits for example on trigger, trigger guard, buttplate and the bolt handle. 96/11s maintain the same serial number as manufactured, before the conversion. It is in fact impossible to establish the year of conversion by analysing the number, but it is possible to find out when it was manufactured as an 1889/96. Various websites can enlighten you about manufacturing dates, such as swisswaffen.com, and books also.

A distinctive feature of Swiss military surplus rifles is the paper sheet stored under the buttplate, which indicates the general information about the soldier who had it issued.
After the “recruit school” in fact, the soldier carried home his rifle, increasing the readiness of the Army in case of a sudden mobilization. The militiaman will still need his personal weapon, as every year he will be obliged to attend a “repetition course”, where he will have exercises. In addition, he is obliged every year to shoot a mandatory program at 300 meters. It is called “obligatorisches schiessen” in German. This whole system is still in use in Switzerland, and I am myself part of this. 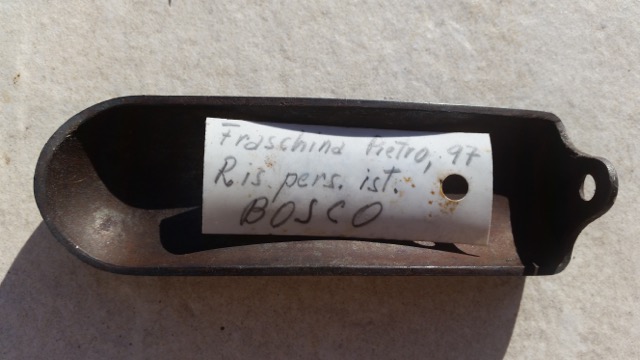 Anyway, as an example I can explain this exemplar’s sheet, analysing the information written on it. On the first line there is the soldier’s name (my own great-grandfather in this case), followed by the birth year – 1897, usually only the last two digits. The next line shows the incorporation into the military unit, in this case an unspecified reserve unit (at that time he was part of the Landsturm). The last line specifies the domicile, simply “Bosco”, a village in the close proximities of Lugano, Ticino (one of the two Italian-speaking cantons of Switzerland), which in the Fifties counted less than 180 inhabitants.

A fundamental accessory that the collector should always have is the peculiar stripper clip. A metal reinforcement section and a pressed cardboard part compose it. The cardboard side covers completely the cartridges, because of the original pattern of the paperpatched 1890, relatively sensitive ones then. 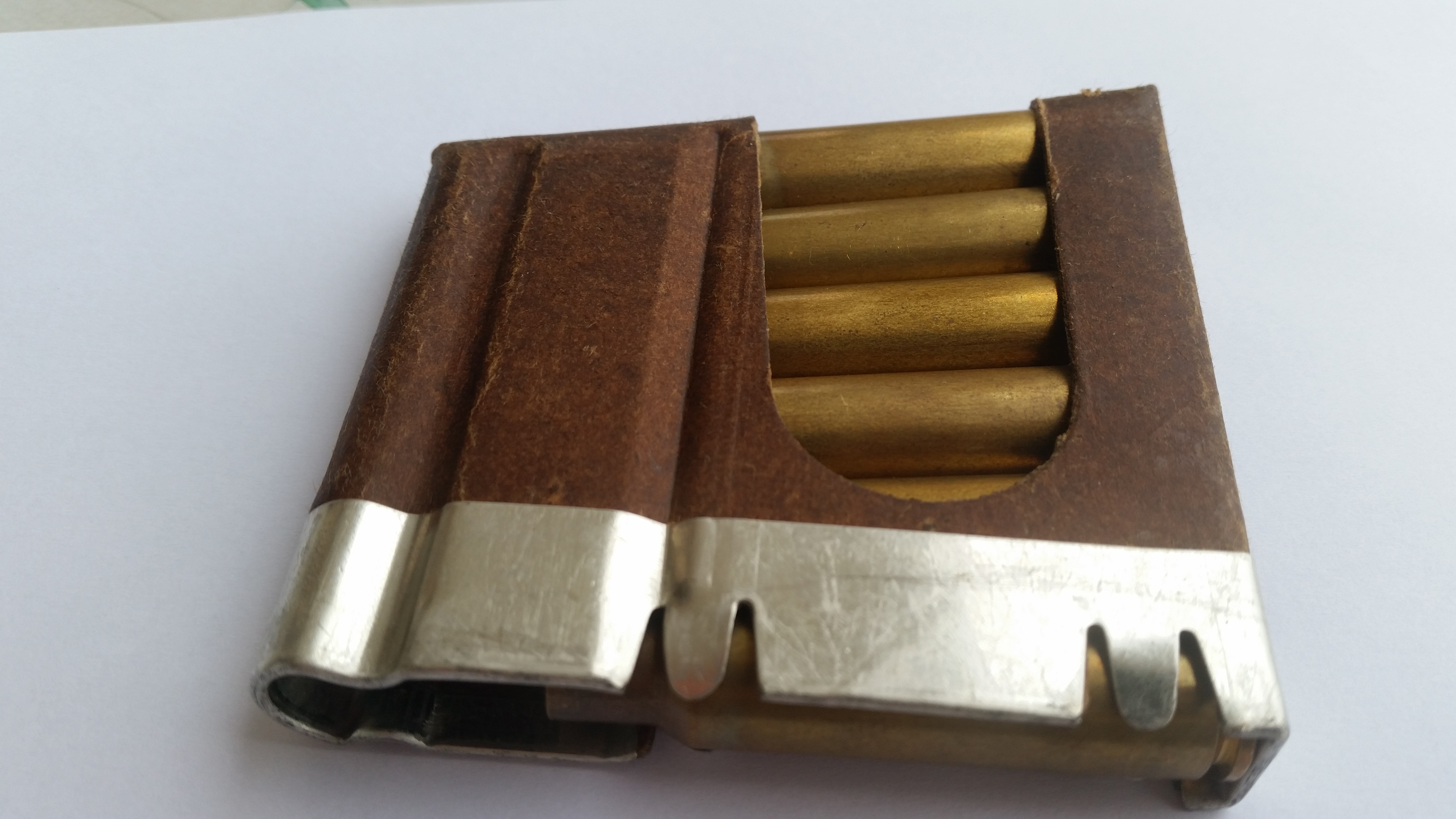 1896/11s were issued with two main bayonet models: 1889/18 (as known as 1889/96 or /99 too) and the 1899, aka 1911.
Depending on the sources, the first type would be a Model for the 1889 infantry rifle, later modified in the early 1900s. A roundly rivet was added, only on the serial number’s side inside the blade groove. The effect was a better blade retention in the sheath. This pattern was mostly issued with 96/11s, even though some exemplars present a barrel ring adapted to the smaller diameter of the carbines’ barrels. 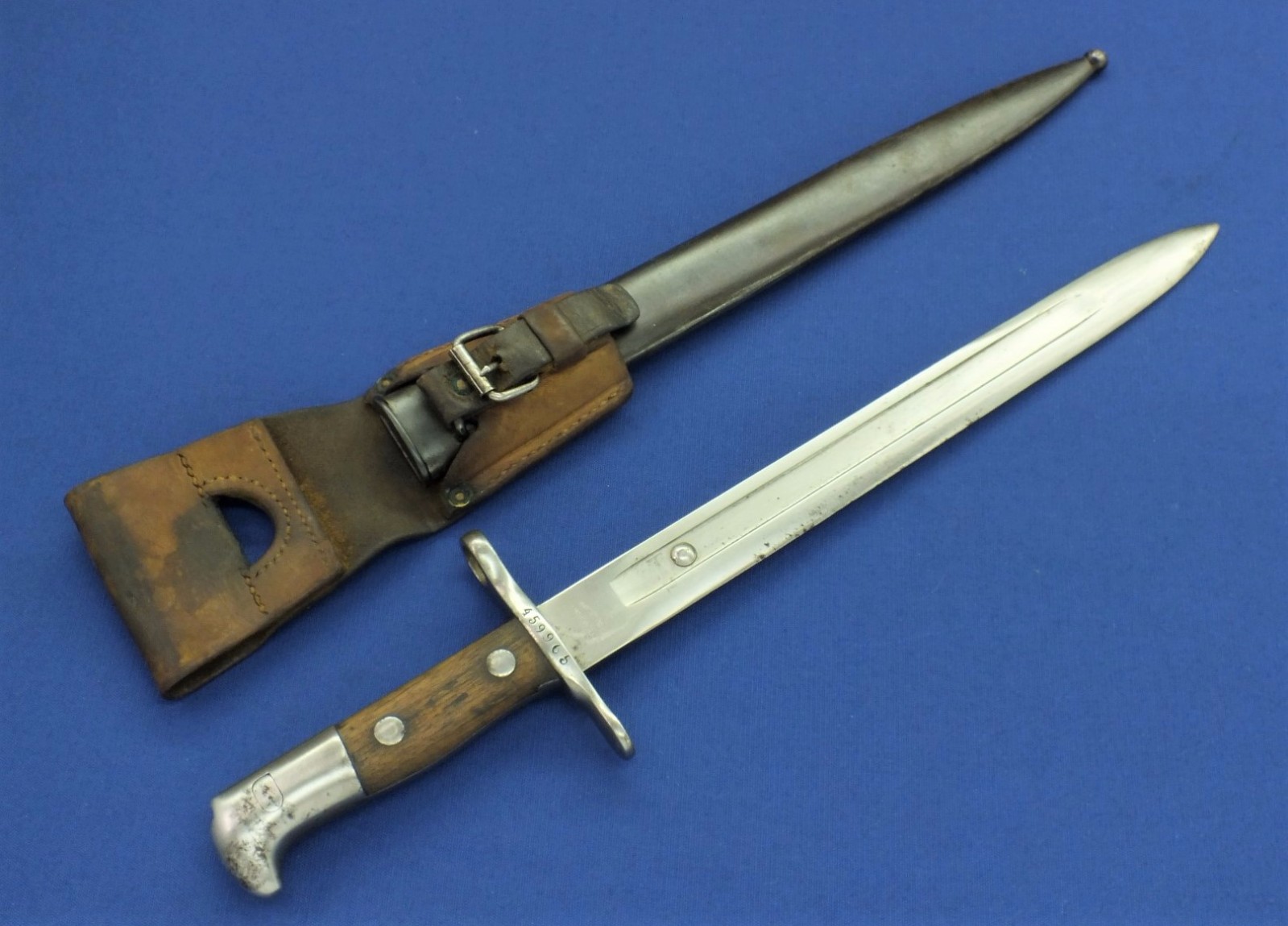 The 1899 bayonet has instead “arrest bars”, again for a better retention in the sheath. The location is still in the grooves, this time on both sides. This pattern would be assigned to both 96/11 and 1911 rifles and to 1911 carbines. As already said, bayonets meant for carbines carry a ring that is smaller in diameter: 14 mm for these and 15 mm circa for the rifles. Carbines bayonets of these two patterns are scarce to find, because starting from 1918 those were replaced by the newer pattern of 1918. 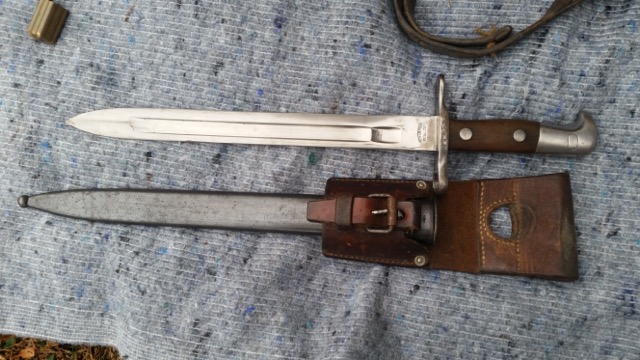 The standard sling meant for Swiss infantry rifles is different from the carbines’ pattern. It is a simple leather 30 mm wide sling, mounted on the underside with two metal buttons, which keep it in position. It can be adjusted in length, by “easily” (they are often very stiff) removing said buttons and positioning them in the other holes. These slings present a similarity to those of the Italian Carcano 1891 rifle. 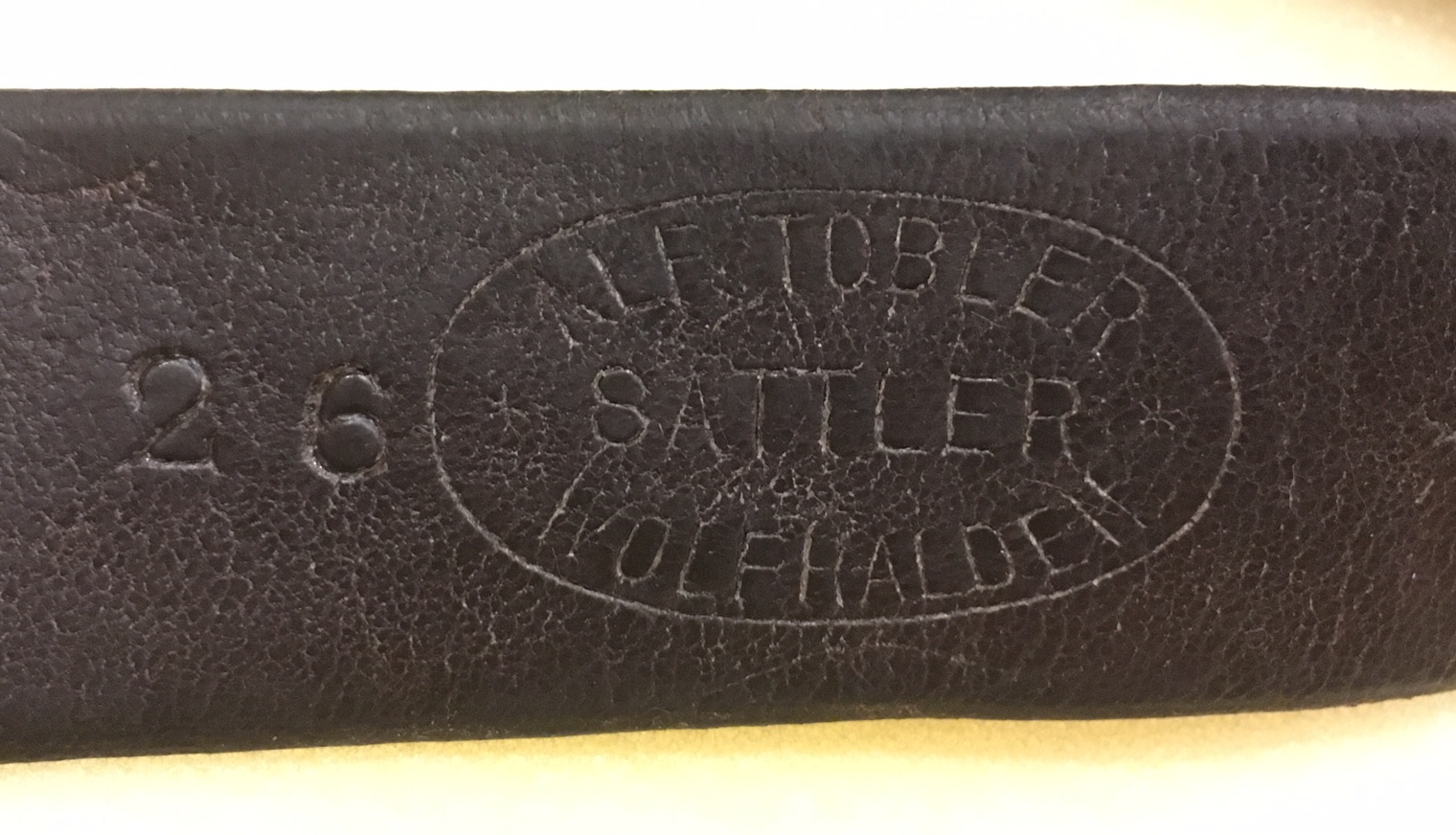 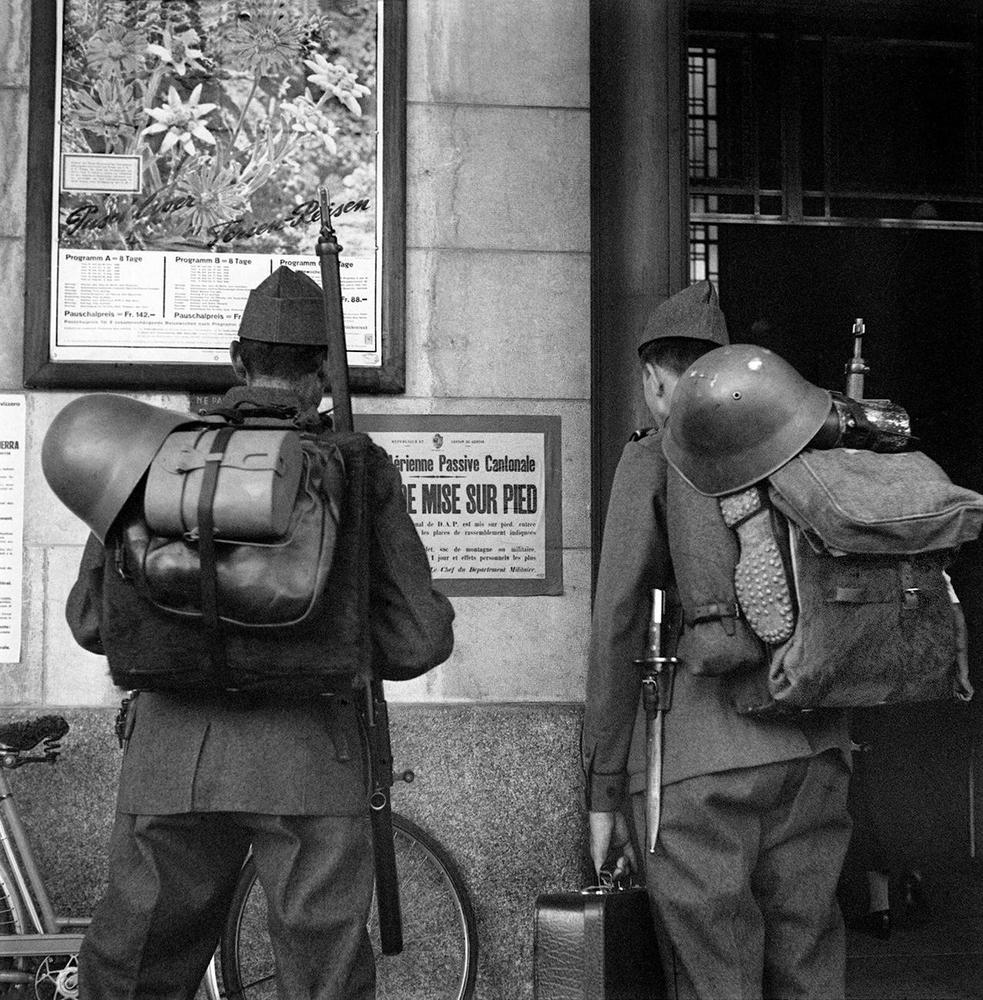 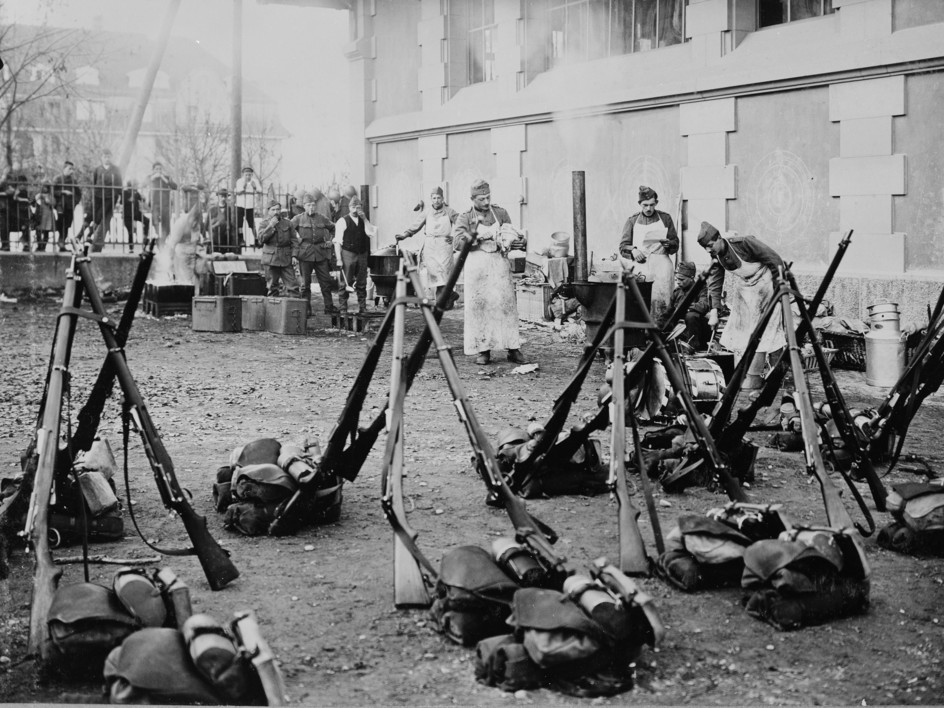 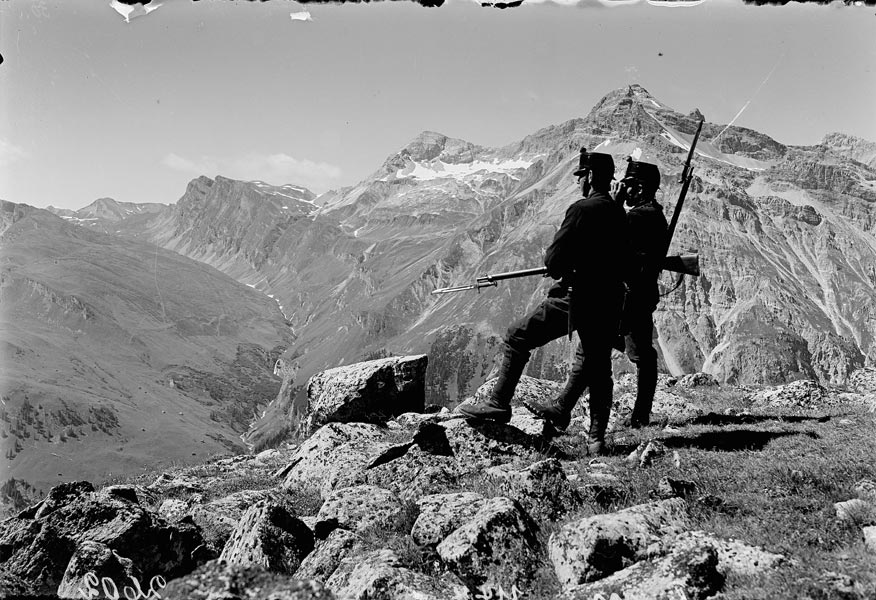