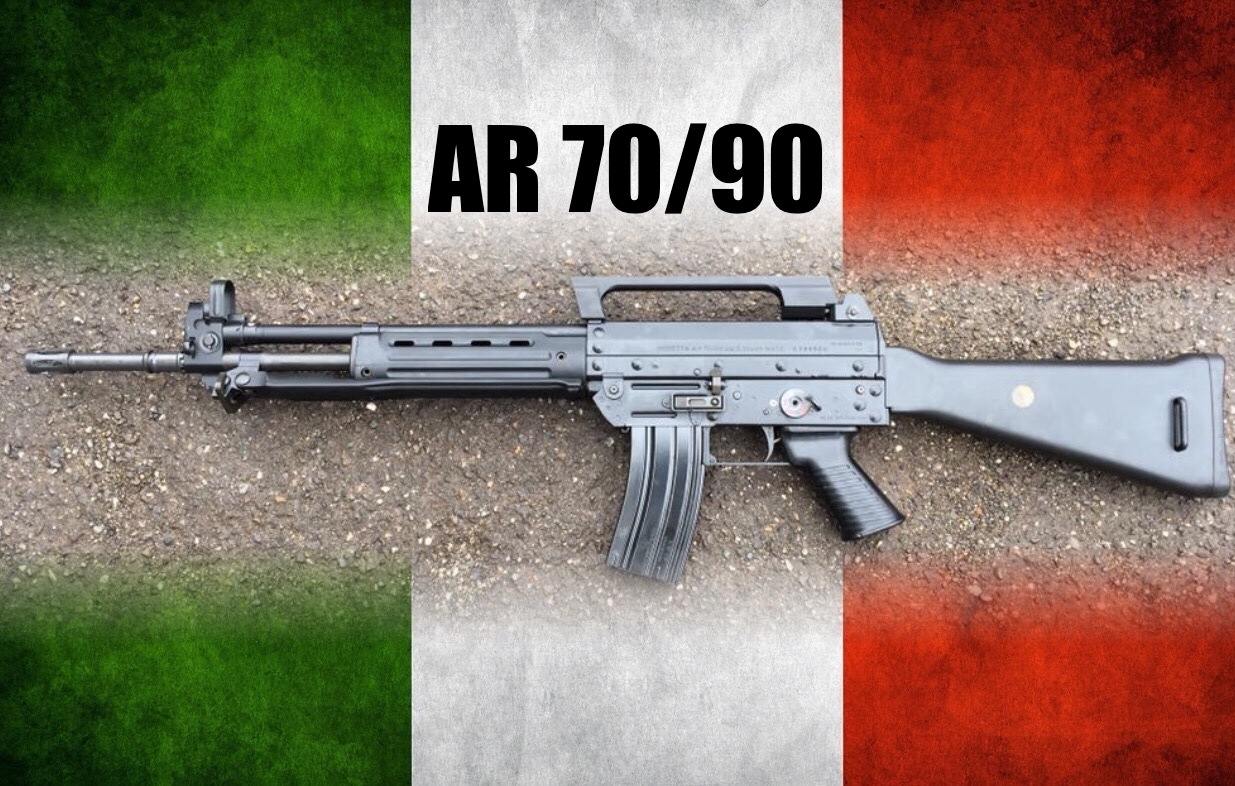 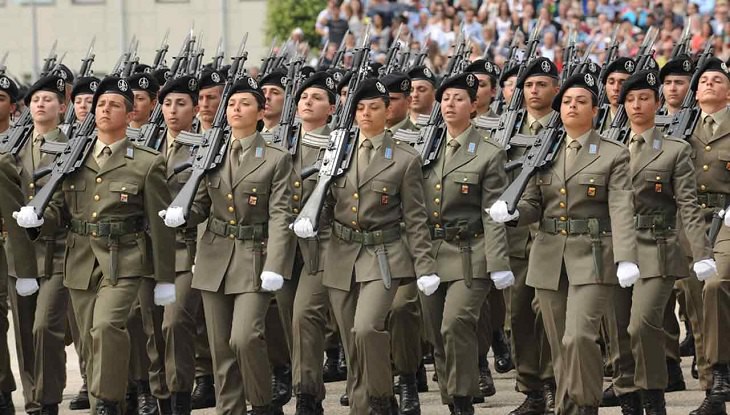 Although being replaced by the ARX160 and Colt M4, the AR70/90 still represents the Italian Army to many.

This gun replaced the Beretta BM59 and has been the companion of several generations of draftee and volunteer soldiers in the Italian Army.

The AR70/90 has seen action in the Italian Army’s most important missions from the early 90’s onwards. Significant operations included: Operation Vespri Siciliani 1992-1998, in which the State sent the Army to Sicily to fight against the mafia, Operation Ibis 1993 in Somalia, the Afghanistan war against Taliban in 2001, the Iraq war in 2003, and the Lebanon war 2006-2011.

Now, let’s step back to 1968 when a collaboration began between the Beretta factory and the Sig-Manurhin factory on a project to give life to a new and innovative assault rifle; however, the Swiss factory gave up on the partnership a few years later leaving Beretta to continue the project on their own. Beretta’s development work on the gun’s design reached completion seeing light in 1972.

In that year Beretta proposed its project to the Italian Army and the rifle was subjected to examinations by the special commission. After several tests, it was adopted with the designation of “AR70”.

Let’s remember also that the design was born under a requirement to meet NATO’s STANAG (Standardization Agreement). 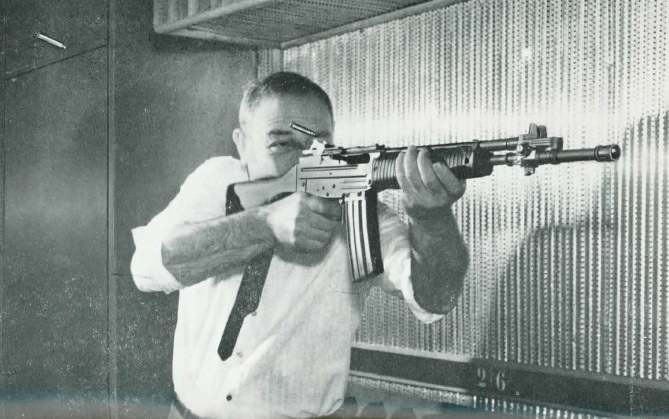 The AR70 was destined to arm special units such as the San Marco Regiment of Italian Navy, the NOCS department of Italian Police, and the Italian Air Force security service VAM (in Italian: Vigilanza Aeronautica Militare).

The original design seemed good, but didn’t obtain the expected result and was never adopted by the rest of the Italian Army.

The three adoptions by San Marco, NOCS, and VAM were necessary because those units were not even armed with BM59 rifles, but rather were still equipped with the obsolete MAB (Moschetto Automatico Beretta) in 9x19 Parabellum.

In the mid-80s the Italian Army deliberated and announced a competition to replace the very dated BM59 in 7.62x51 NATO with a modern 5.56x45 NATO design. Obviously Beretta participated, and in 1985 it presented a new improved rifle derived from the AR70.

Competing designs were also submitted by Bernardelli with an Israeli Galil named VB-SR and Franchi with the G41 on license from HK.

In 1988-89 Beretta’s submission won all of the evaluation tests conducted by the Military Factory “Polo Mantenimento Armi Leggere di Terni”, and in 1990 was adopted by the Italian armed forces as an individual weapon, with the designation of AR70/90, with “90” referring to the year of adoption.

The AR70/90 is a long-stroke gas piston operation weapon, with the gas recovery tube mounted above the barrel. There are three manual gas adjustments affecting cycling. Adjustable vent holes release a portion of the ported gas pressure. This adjustment has two options for higher and lower pressure. The “O” (open) position allows the most venting for lower pressure; this is the normal use selection. The “C” (closed) position restricts venting for higher pressure; this is for use in critical conditions to ensure operation.

A third gas adjustment option is a lever that completely seals the gas port to maximize pressure within the barrel for launching rifle-grenades. 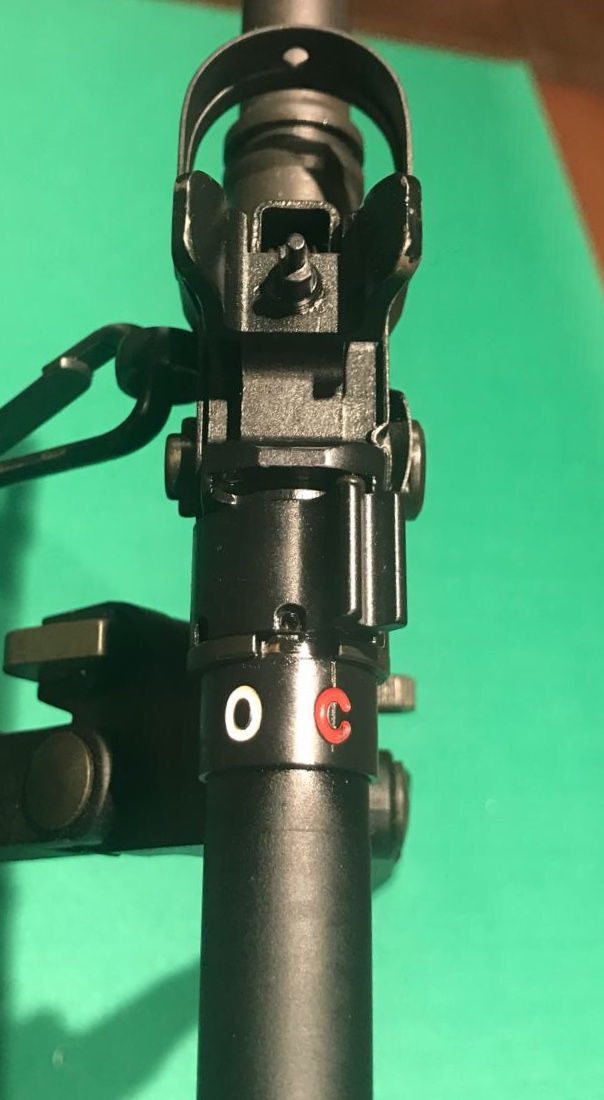 A circular selector switch is placed on the left side of the receiver and has four positions: 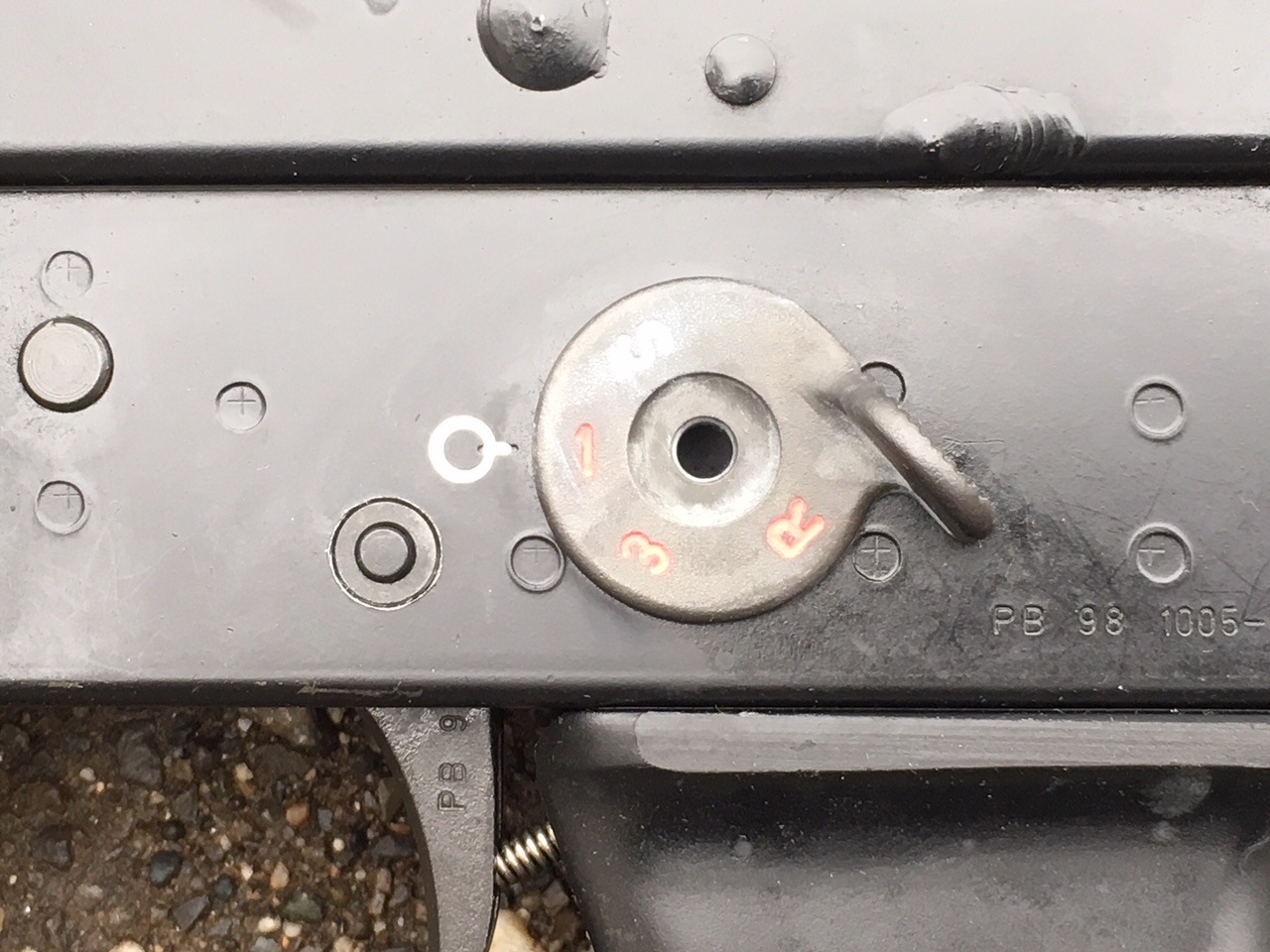 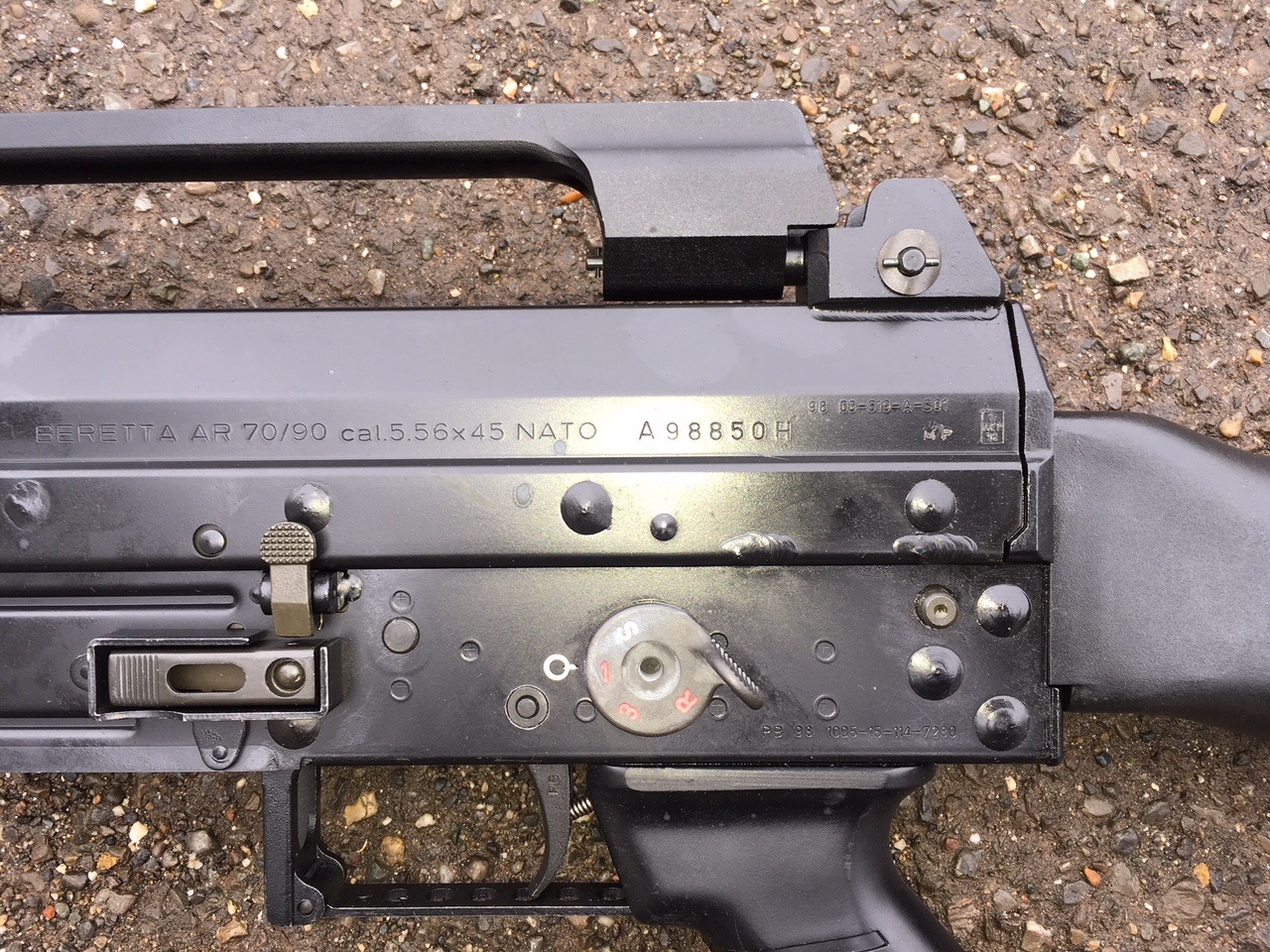 The diopter rear sight is placed between two small protection wings and is set for 250 or 400 meters in according with NATO standard.

A removable transport handle can be attached on top of the receiver utilizing brackets of the hooked STANAG type (but not really). This bracket apparatus also allows for the mounting of several equipment accessories such as light intensification systems and 4x optics.

Clearly derived from the M16A3 but different from the Americans, Beretta added rail mounted sights for quick ranging at short distances.

Additional equipment for the AR70/90 includes the American grenade launcher M203 firing 40x46 grenades. The M203 requires a special apparatus designed by PMAL (Polo Mantenimento Armi Leggere Terni) allowing for installation under the handguard. The M203 was used during operations in Somalia and was utilized by the Carabinieri and Guardia di Finanza as antiriot smoke launcher.

Augmenting the M203, is the new GLX-160 grenade launcher developed for the Beretta ARX-160 rifle. Thanks to some modifications, the GLX-160 is coupled to the AR70/90.

Moreover, it has a winter trigger guard adaptation in order to allow for the use of heavy gloves. The trigger guard can be hinged open simply using the point of a bullet. 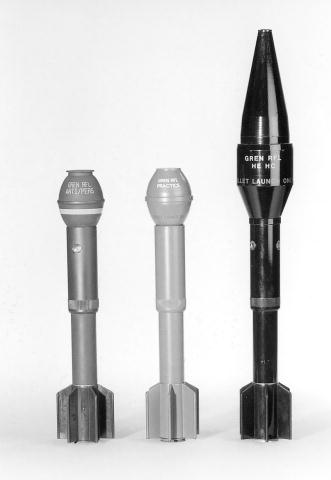 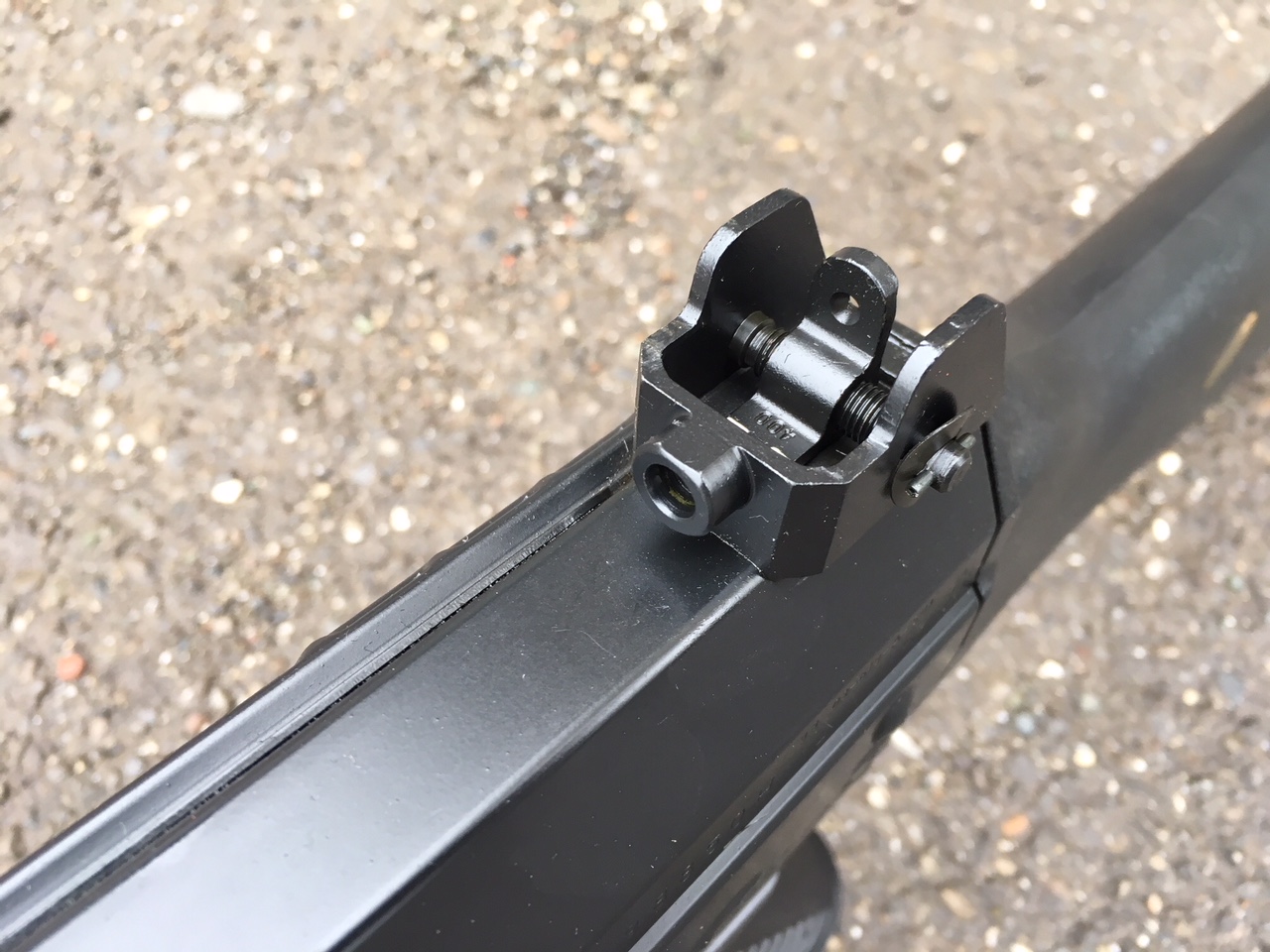 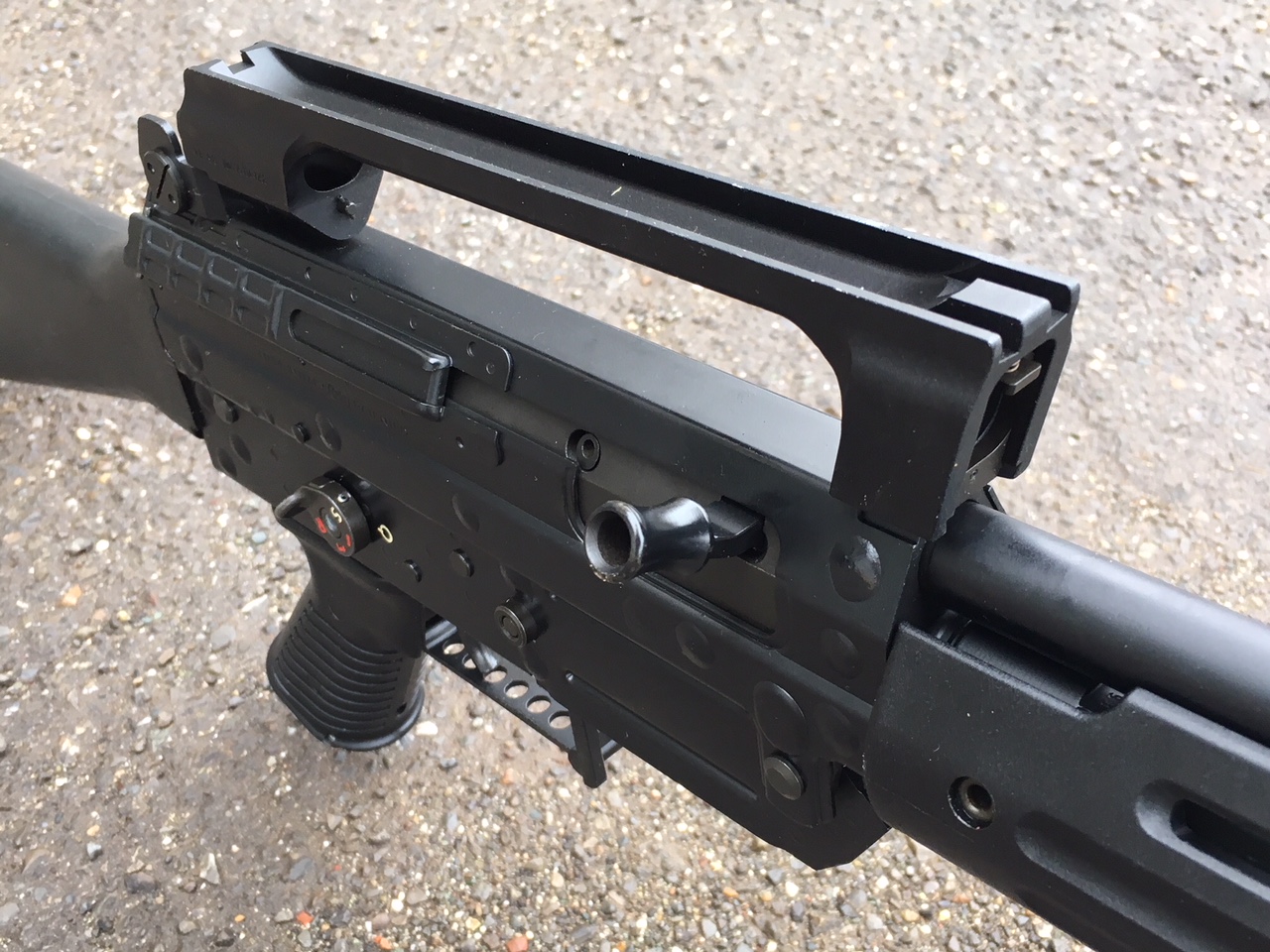 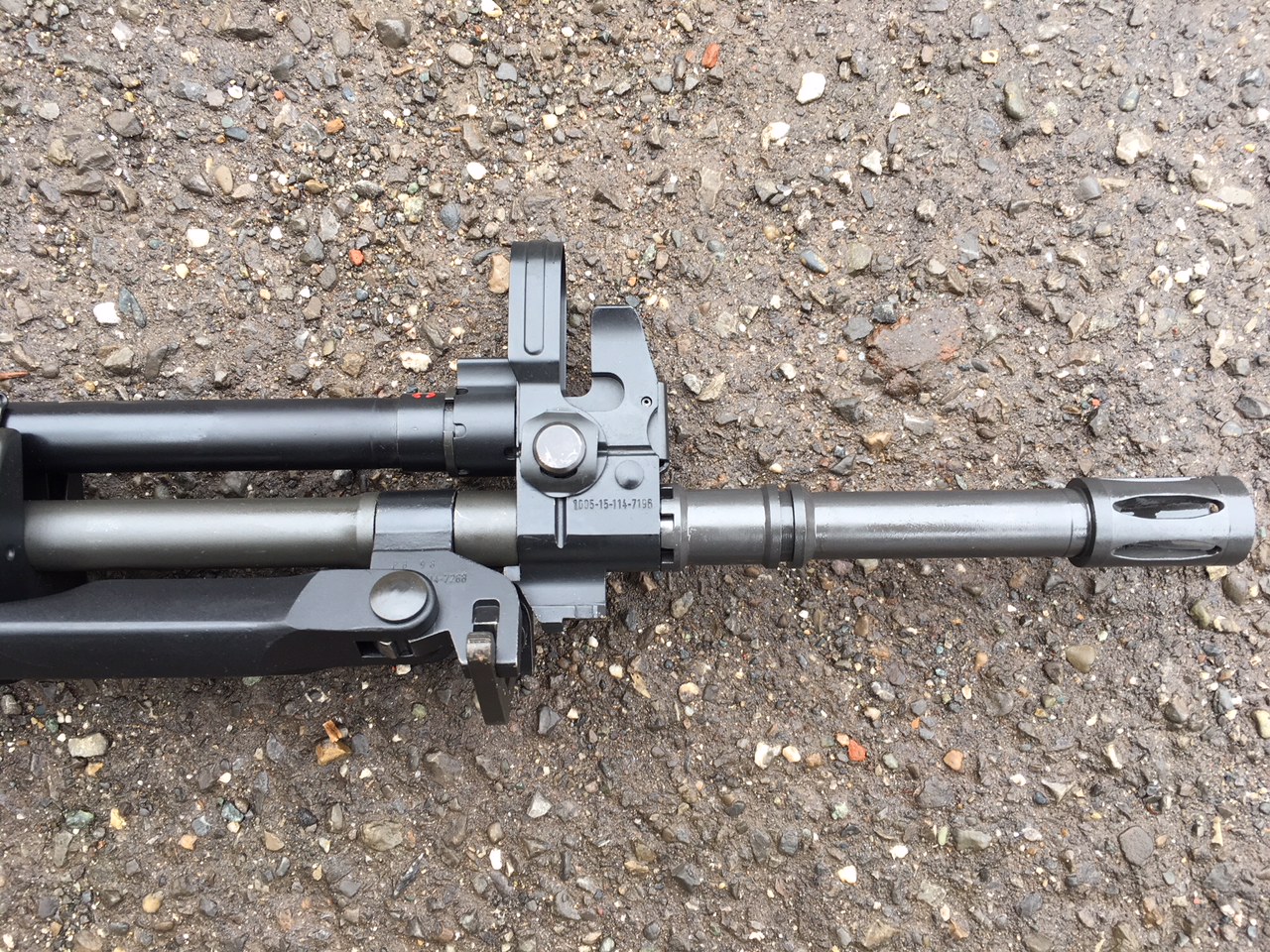 Like the BM59, the Army ordered the AR70/90 to be delivered in two additional configurations:

-  SCP70/90 (Special Carabine Paratroopers) version, also with a folding buttstock, for airborne or mechanized troops, incorporating a shorter muzzle break allowing it to fit the sheath employed in parachute jumps. This model also utilized a standard grenade launcher attachment using the bayonet lug (very similar to that previously used on the BM59PC).

Regarding the “C” of the model designations, some claim that it may stand for “Corps” instead of “Carabine”. According to logic, we believe that being the alternative to “Rifle” of AR, “Carbine” sounds more correct.

There was also a model AS 70/90 (“arma di squadra”) envisioned as a support weapon (light machinegun) to support sustained fire. The model had a unique longer barrel with a heavier profile incorporating a muzzle break of different design. Other differing features included a ventilated, sheet metal barrel heat guard; a more structured and adjustable bipod; and a more solid buttstock incorporating a rear hold for the non-trigger hand. The “L” diopter was replaced by an adjustable, folding rear sight. The most substantial difference in comparison with other models was the use of an open-bolt firing mechanism, to avoid inadvertent cook-off of chambered rounds after sustained automatic fire.

The composition of the buttstock in the AR70/90 infantry version is of fiberglass strengthened nylon making it resistant to impacts, with a gum recoil pad. In the SC and SCP versions, the buttstock is made of a light aluminum alloy, making for a lighter weapon and allowing a buttstock profile that neatly folds along the right side. The SC/SCP butt plate is polymer with a compartment housing a cleaning kit. The hand guard is thermoplastic with aeration holes to lighten and cool the weapon.

Below the hand guard, there is a removable bipod of light alloy. 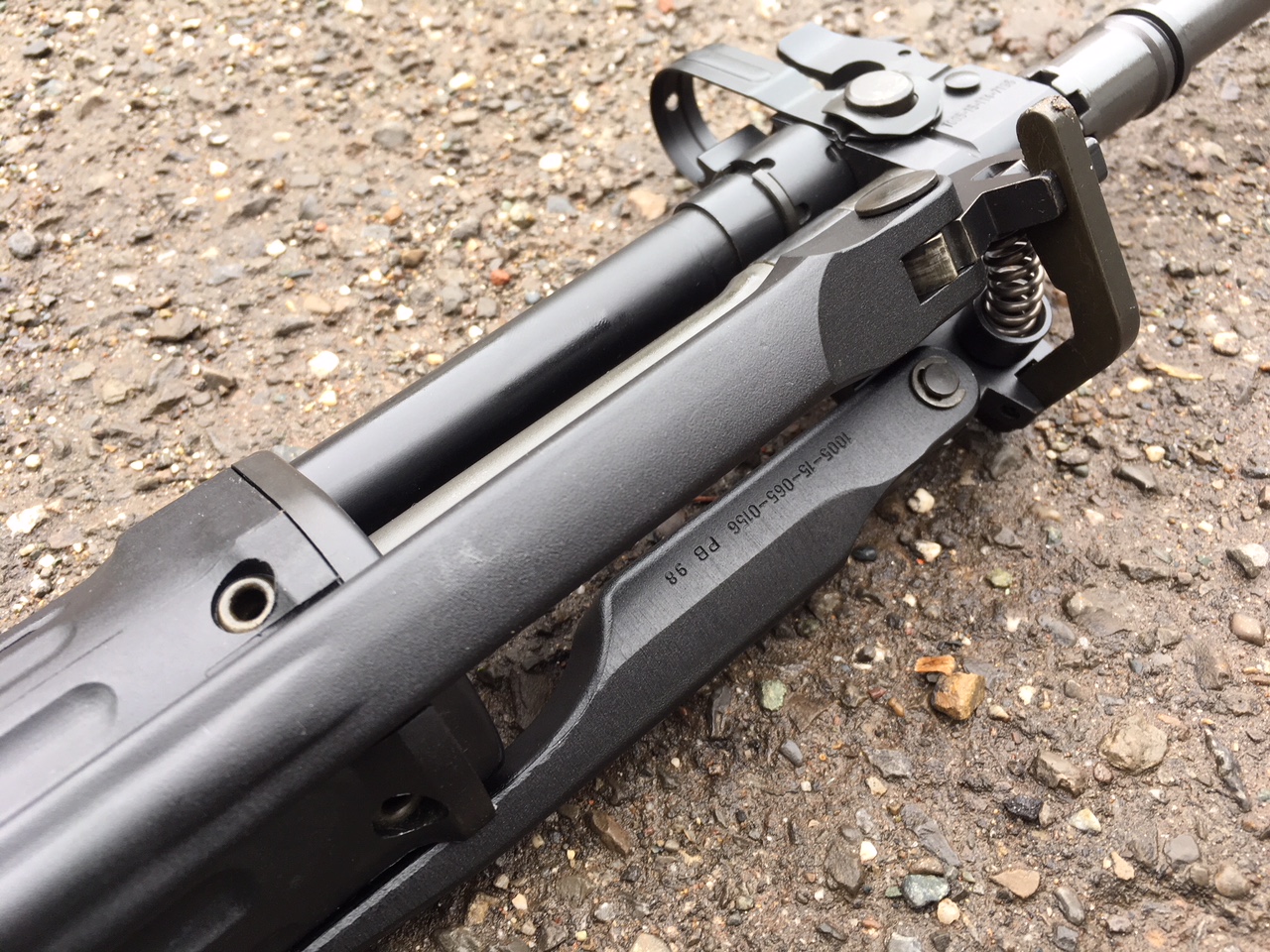 Ammunition accords to new NATO standards, firing 5.56x45 SS190 ball type 62 grain projectile (steel penetrator with posterior core of lead), which replaced the previous 55 grain M193. Magazine design was set to the same STANAG 4179 standards being the same as all other 5.56x45 NATO weapons and thus interchangeable; however, early production magazines were hard to employ in other NATO weapons. A notable characteristic of Beretta produced magazines is that they are made of solid rust resistant steel, instead of light alloys. 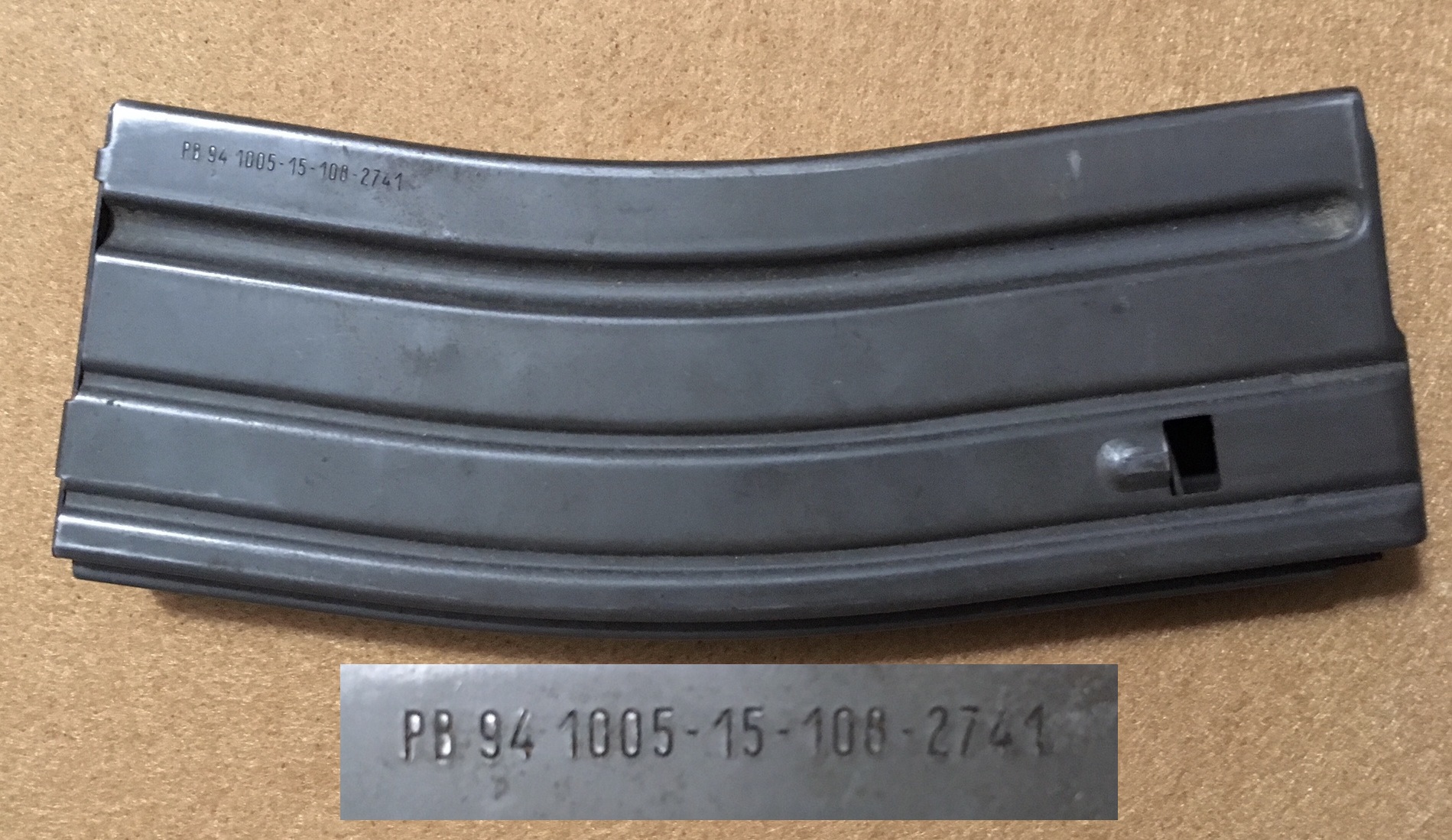 The AR70/90 has been marketed by Beretta and adopted by many nations such as Egypt (SCP version), Burkina-Faso, Malaysia, Mexico, Malta, Morocco, Nigeria, Paraguay and Zimbabwe (see gallery at the end of the article).

As first fielded, the gun was equipped with a special fastening attachment for the optic, substituting the handle. Obviously, this fitting wasn’t successful as it deviated from STANAG dimensions and was by then ancient compared to what the military market could offer. 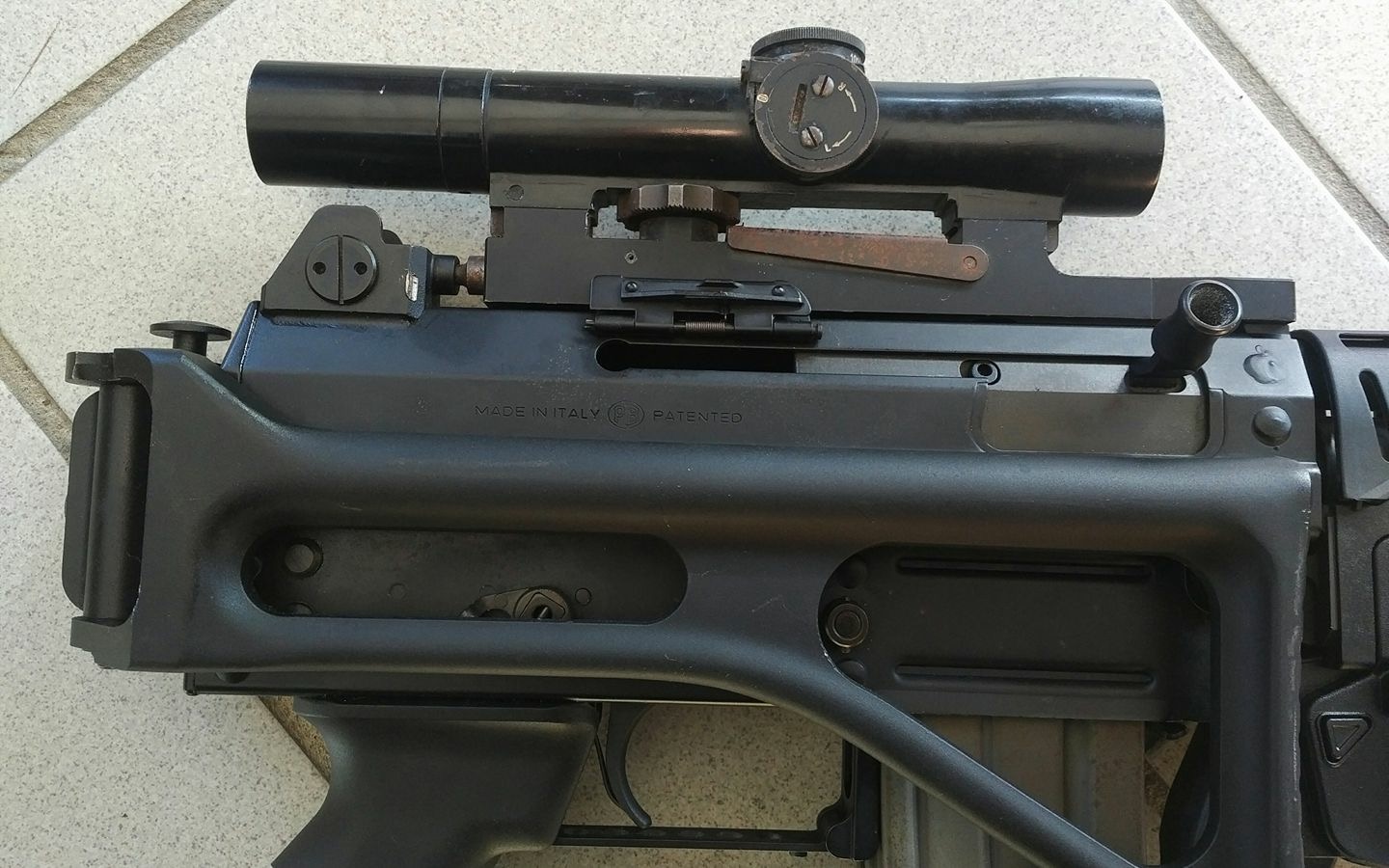 Later the AR70/90 made use of the ubiquitous Picatinny rail system, allowing for the use of a multitude of equipment including special optics, lasers, red points, etc. These variants were also utilized by special units such as the Col Moschin and the San Marco Regiment.

Although many units had the freedom to personalize weapons, we must note standardized equipment such as the night vision Zeiss Orion and the pointing system Aimpoint Red-dot. 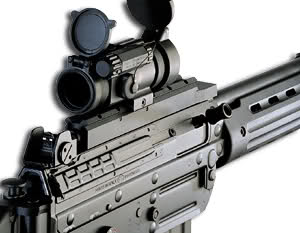 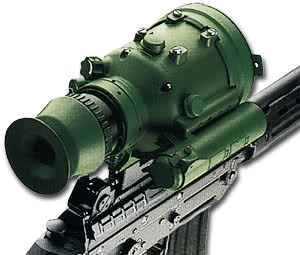 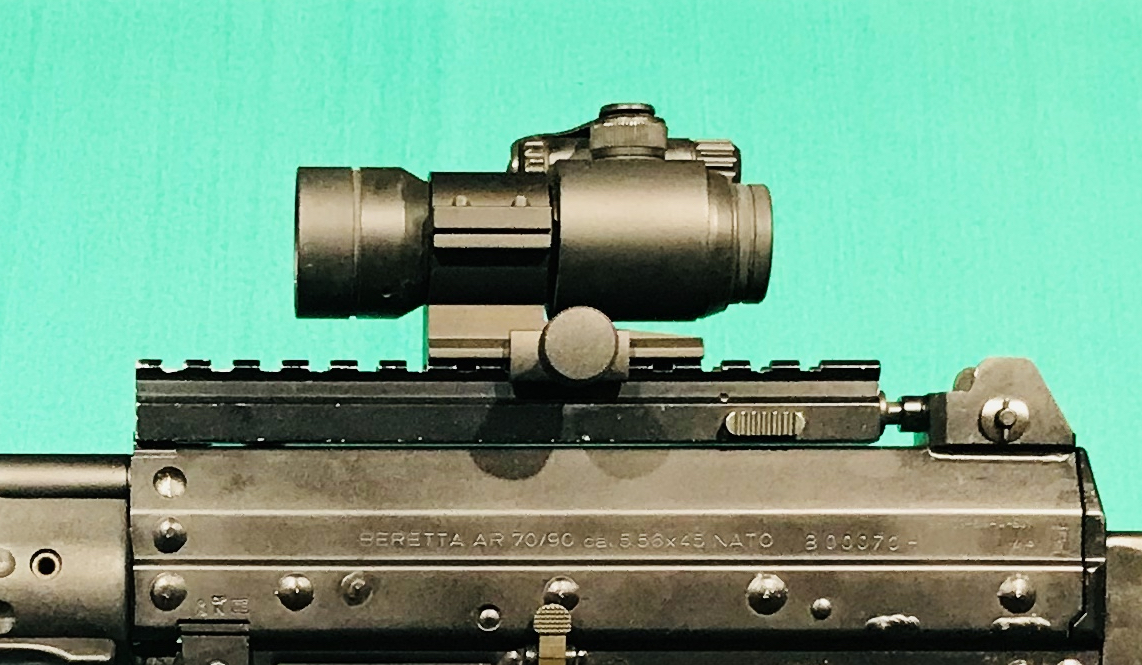 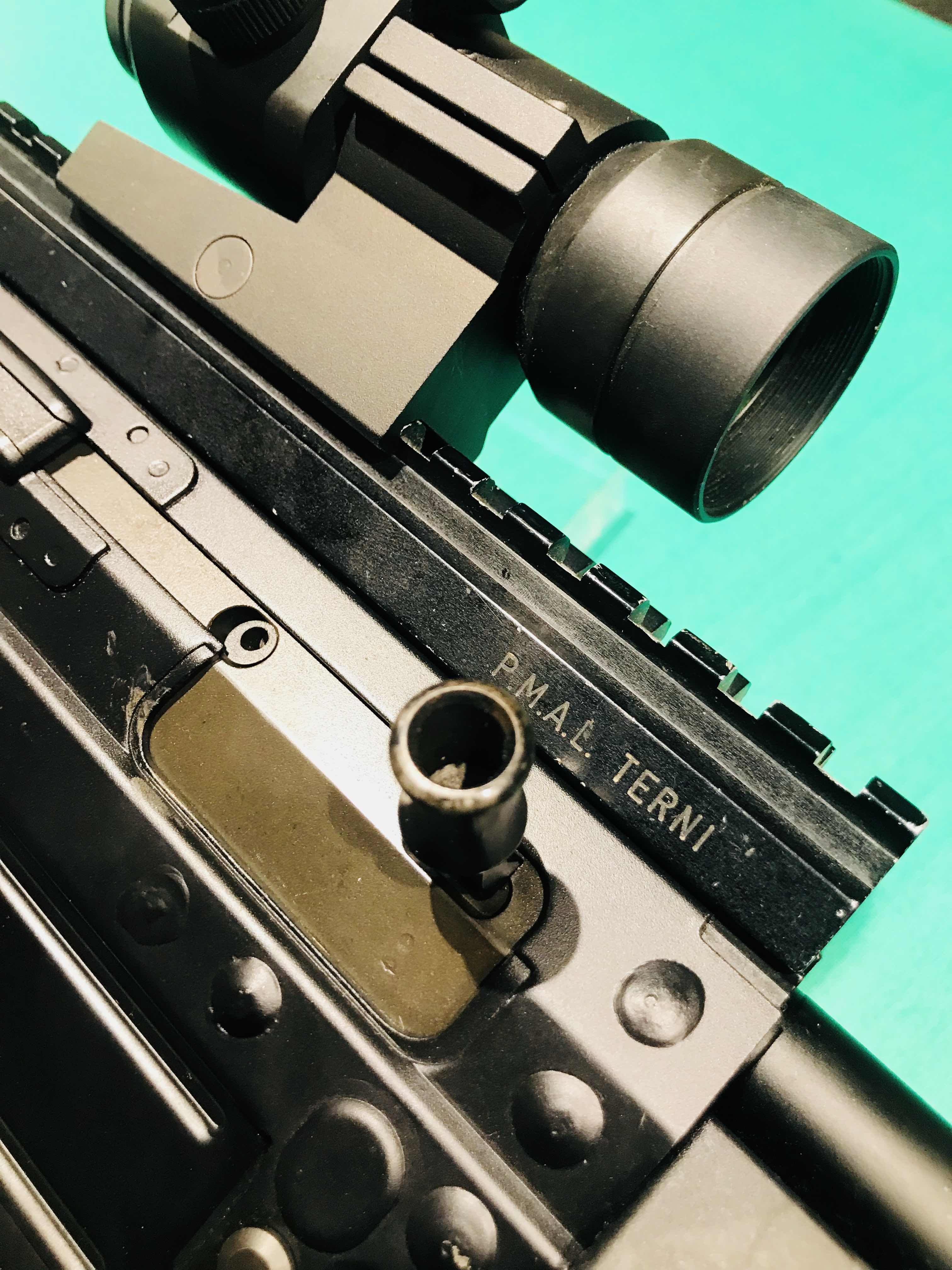 The AR70/90 bayonet originates directly from that of BM59, named M4, which itself originated from that for the American M1 Carbine. It has a knurled black plastic handle, but the same type of connection. 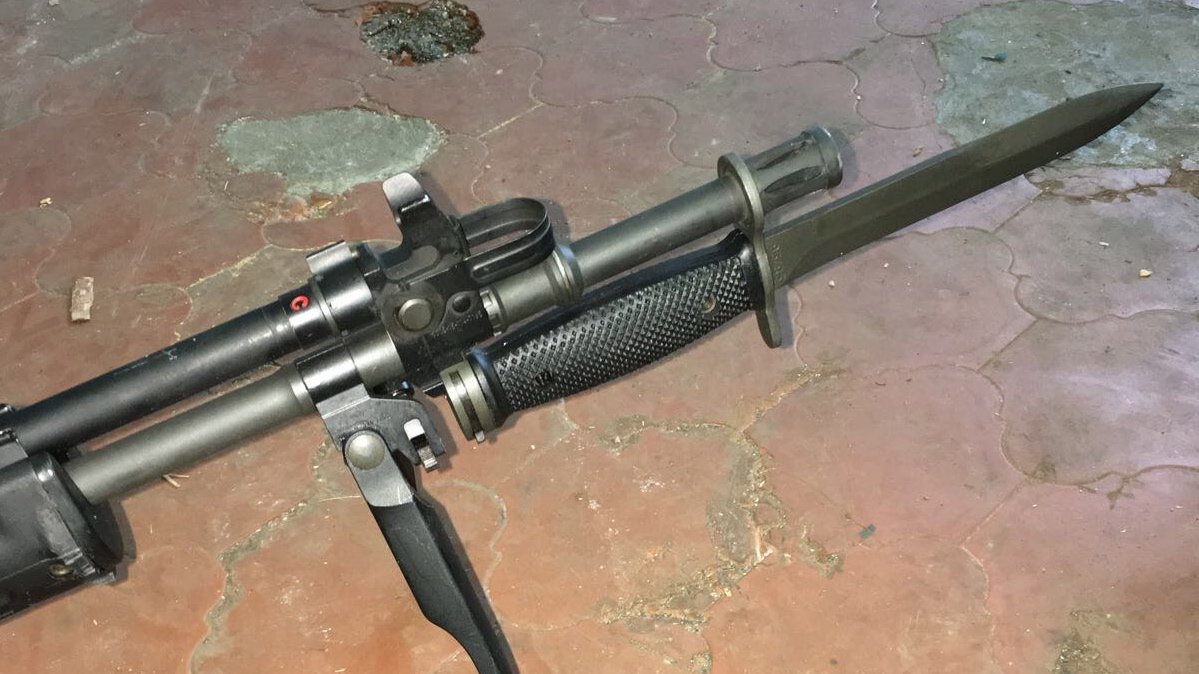 The rifle sling is made of durable fabric with a quick release system; originating from the AR 70 two-point sling. 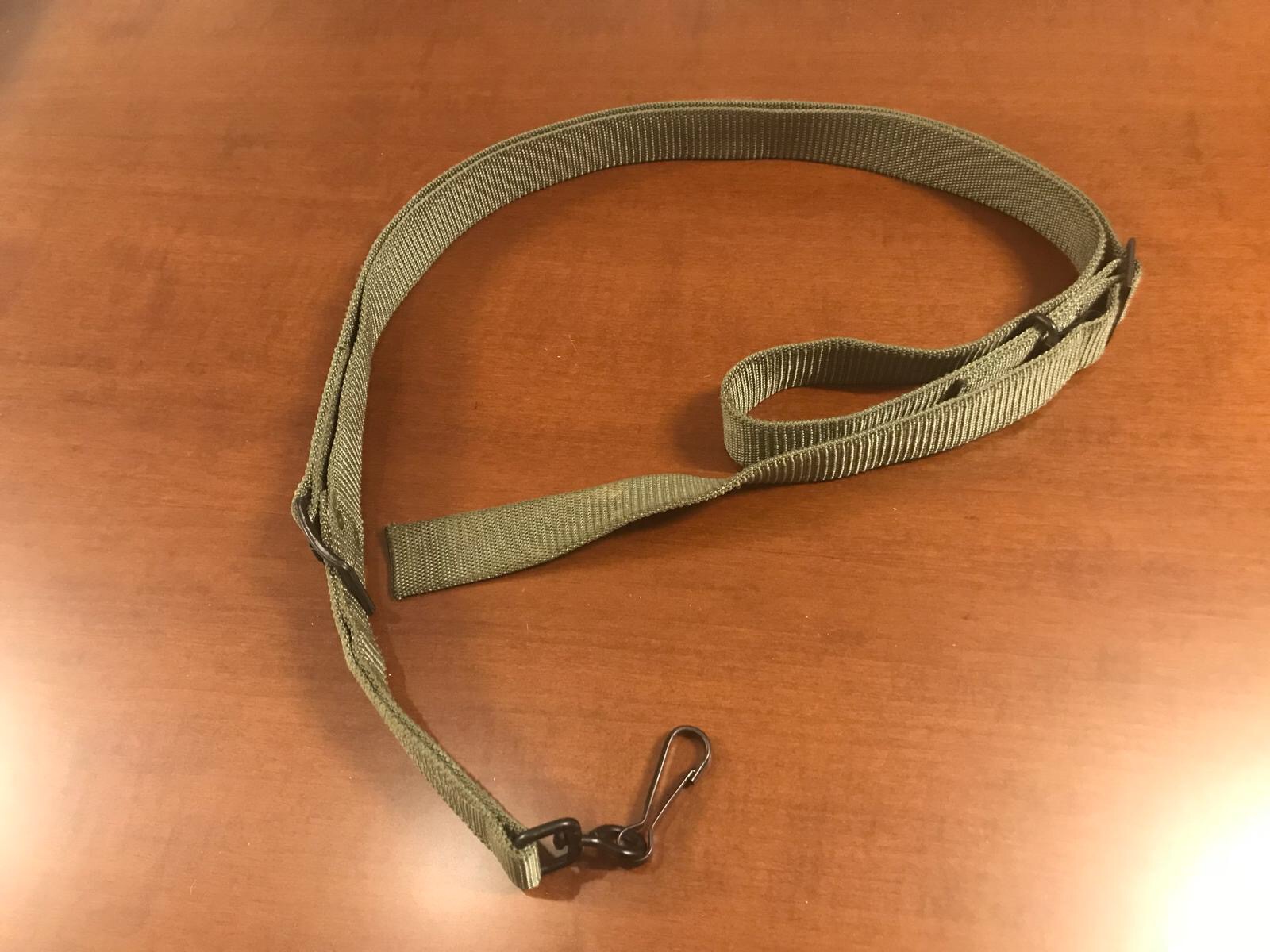 Here the blank fire adapter made by Beretta.

The AR 70/90 has had an active service of over 20 years and is still part of the Italian Army’s equipment today, even if being gradually replaced since 2010 with the new and more modern Beretta ARX-160 rifle, belonging to the new “Soldato Futuro” project.

Thanks to this initial retirement, the Italian Company NUOVA JAGER lead by Massimiliano Locci, to which we give major gratitude, managed to gain an amount of the dismantled standard version AR70/90 rifles, directly from the Italian Army depot. After demilitarization, these will enter the private market.

Thanks to Doug Eurom for the help on this translation. 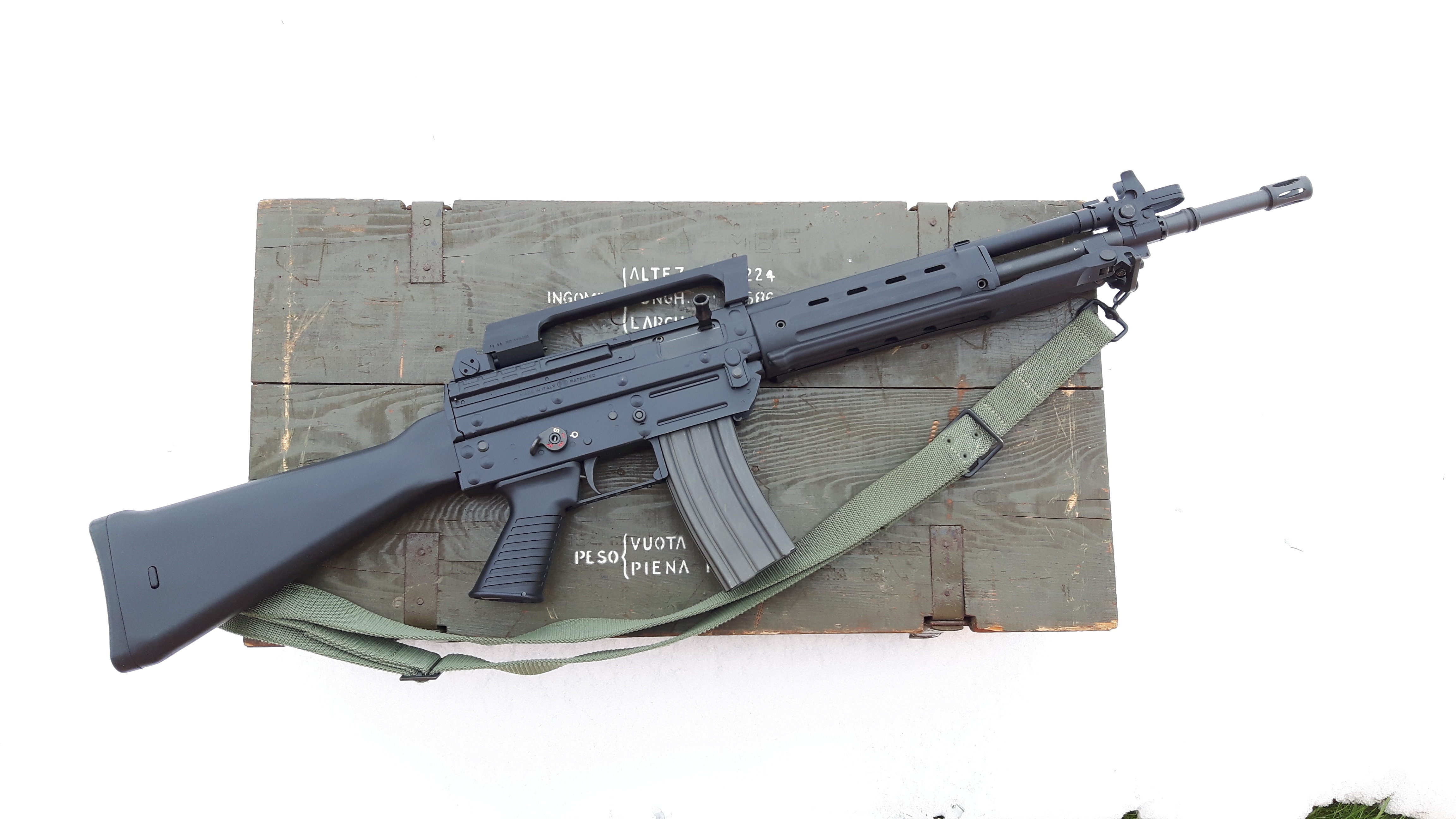 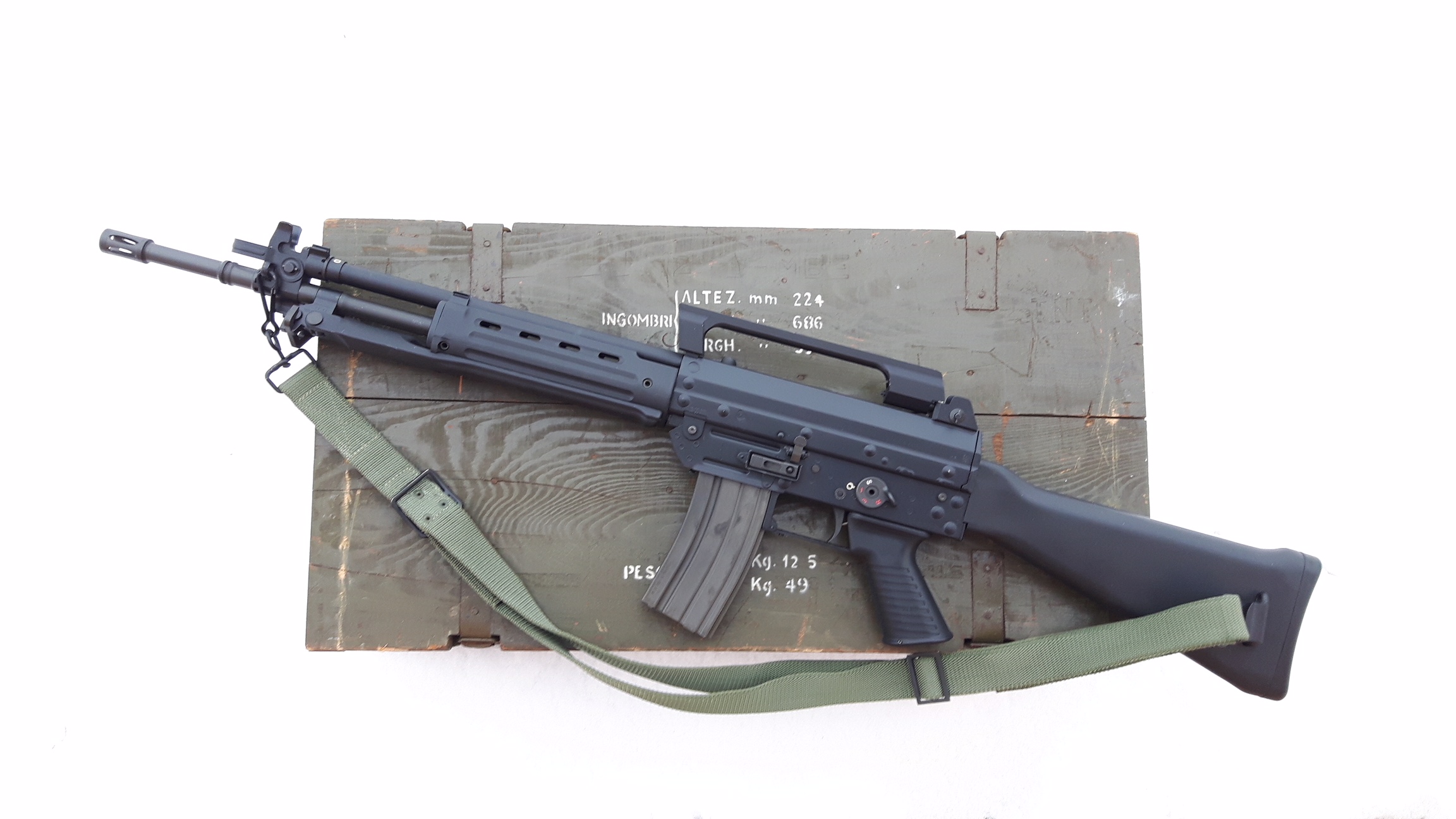 Click HERE to see AR70/90 in action in our image gallery database. (look at the end of article)